Hey, can anyone else believe this? 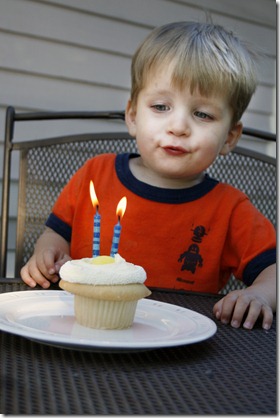 Rocco was really big into sign language for awhile but recently he’s traded in his signs for words, most of which are so far off from the real words (for example, “star” is “baba” and “shoe” is “hey”) that I’m pretty sure the aliens have been teaching him to speak.  It’s certainly not his older brother, who has only taught him how to say, “OW, ROCCO, NO!  NO TOUCH BROTHER!”

Anyway, when Rocco gets up in the morning it’s often waaaaayy too early for us (like 4:30AM too early) so we ignore him until it’s impossible to ignore him, at which point we periodically open the door a crack, toss a toy or a crust of bread into the crib, and leave. This usually lasts until 6AM when he resorts to one of his evil wake-up plans:

Rocco’s evil wake-up plan #3: He lays in the crib, moaning pitifully, “Mama hug. Mama hug. Mama Dada hug,” which is what he calls being picked up—a hug.  Sometimes he actually squeezes out real tears for this one.

We are so weak.

Vincenzo: Mom, we’re sitting at a fancy table…
Me (not looking up from menu): M-hm.
Vincenzo: …because I drew on it!

2. Watching sailboats with Aunt Shel, who had recently taught him about spinnakers:

Vincenzo:  I like the sailboat with the red and white vinegar.

3. Rocco, seeing a clay bracelet Vincenzo had made: 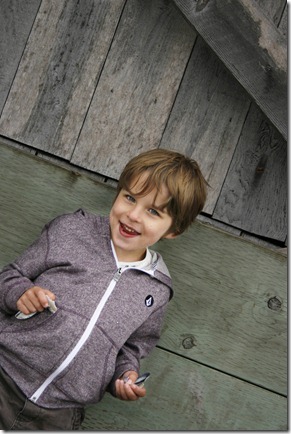 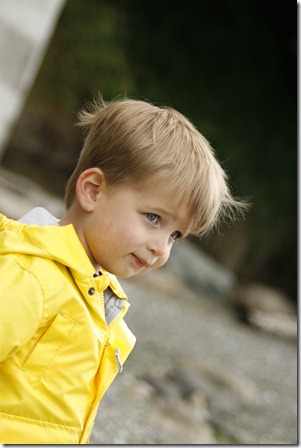 Vincenzo has gotten addicted to a series of books called Fablehaven.  The more I read them, the more I have begun to really, really hate the author.  Take the first paragraph of the fourth book, for example.  You know—the paragraph that’s there to kick off the book with a bang and grab the reader’s interest:

Kendra Sorenson briskly scraped the head of a wooden match against the rough strip on the side of a rectangular matchbox.  Cupping her hand to shield the new flame, she held the burning match against the blackened wick of a candle stub.  Once the flame spread to the wick, she shook out the match, thin strands of smoke winding upward.

I’m just saying that if I were writing the book (and I’m not, because I could never write books with such slow plots and such long-winded descriptions and such unlikeable, one-sided characters), I would have written that paragraph somewhat differently.  Mine would go something like this:

But I didn’t write the book.  So go back to the original, long-winded paragraph.  Stretch it out to the length of a page, then multiply by 525 for the number of pages in this particular book, then multiply that by 5 for the number of books in the series.  What you end up with is one mother who begins wondering what it would feel like to stick toothpicks underneath all her fingernails.

Because surely it couldn’t be as bad as hearing the question, “Mom, will you read some Fablehaven?”

Hello and welcome to MrsMouthy’s farm!  This week we are featuring:

(4 for the price of 1, as these are actually all attached.)

(The leaves are best when they’re yellow, right?)

(It’s a bit bitter, which has nothing at ALL to do with the farmer who planted it.)

I was going to make a comment about how while this food looks mutant and/or sick, this is what truly organic food looks like…but then I remembered the neighbor went out and sprayed every last leaf of everything with pesticides a month ago.  64 gallons of pesticides on our two-bed vegetable garden.  He meant well.  He also meant well when he pulled up all the corn I planted to put in his cucumber plants.

Anyway, at least I remembered to cover the blueberry bushes with netting this year so the birds won’t eat all the berries.

(I have no idea how anything could die of thirst in the weather we’ve been having.)

(I think this was suicide.)

It’s been like this all summer, and I am using the word “summer” quite loosely:

Blech.  What’s it like where you are?  I would really love a good drought story…