Last week was an exciting but busy one, with Rocco and Leo being in plays over the weekend. Leo played Smee in Peter Pan and Rocco played Trinculo in The Tempest, Disney Cruise Version, as his play director is the creative sort.

A few weeks after rehearsals started, Leo began asking about what bouquet I was going to make him. He gave me a lot of suggestions and asked so many questions about it, I grew suspicious it’s the only reason he signed up for the play. He had big expectations after the Twinkie minion bouquet I made Rocco last year. It was a lot of pressure! Fortunately, I managed to pull it off.

In Rocco’s play, most of the lines were true to Shakespeare’s work, but every once in a while a line was altered to have the name of a candy in it to work in some of the Disney Cruise stuff, so I made Rocco a bouquet of all the candies mentioned. Unfortunately, I didn’t get a picture of it until he and his friends took literally one bite out of all the candy.

This was the first time any of my boys had a role not added in to uphold the “no cuts” policy (you may remember Vincenzo as the left front wheel in Chitty Chitty Bang Bang, or as a member of the on-stage audience whose role it was to have occasional facial expressions in Mid Summer Night’s Dream).

Rocco is in the penguin costume, as I’m sure Shakespeare intended.

Leo is the one grinning as his throat’s about to be slit.

He had to put on a few pounds to play the part. 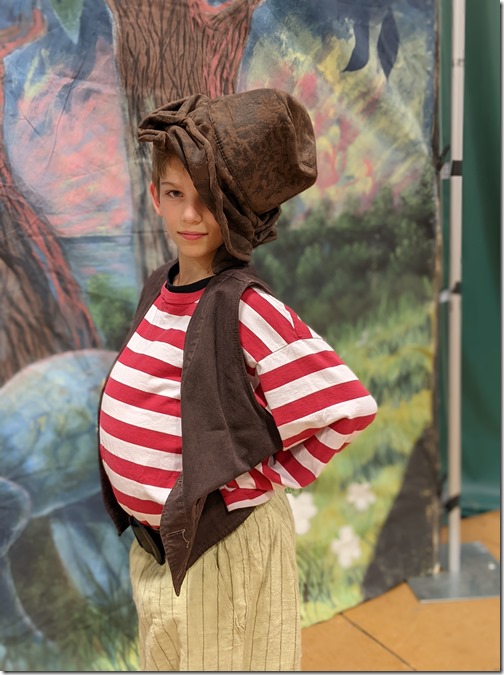 Leo was so proud of his big role. He identified as Smee so much that for the past month it’s been all “Aye aye cap’n” and “Ahoy, mateys!” at home. He actually practiced the songs and dances on his own and learned how to play his solo, I’m a Little Teapot, on the piano, even though he hates playing piano.

His excitement was so contagious, even wearing a mask didn’t prevent me from catching it. I’ve never done more than the minimum duty for plays, chaperoning the required rehearsal and signing up for a committee that requires the least amount of work. This time, with my boys having bigger roles, and specifically with Leo having a role big enough to have its own understudy—well, I couldn’t help myself. There I was, showing up to practices I wasn’t chaperoning, coaching my kid on the way home from rehearsals, making my own adjustments to his costume, and having the music director send me a copy of his mini solo so we could practice at home. I did everything short of spray-tanning him.

The month and a half of practices flew by. Opening night happened. Closing night followed. The boys took their final bow, collected their bouquets, then went home and picked up life where it left off six weeks ago.

I’m sitting at home, looking at the fridge where last week hung an intense, color-coded schedule, feeling a bit empty. I don’t want to go back to normal life! I want the songs and dances, the spotlight, the applause, the bouquets. I want my little monkeys to dance again! Here I am on the couch, feeling like a bride the day after her wedding.

Okay. Reality check. My boys were in plays. They had a fabulous time, they loved their roles and their bouquets, and when the plays were done they happily moved onto the next thing. That’s all a mother could hope for.

That, plus a stage, a musical director, an ensemble, a spotlight, and an audience…

It’s been a while since I blogged, so let me get you all caught up:

Mother’s Day was not a bust after all. Vincenzo purchased one of the cards from student market (for the mere price of an empty Milkita wrapper) and surprised me by actually signing the inside of it!! Leo even made me some coupons: 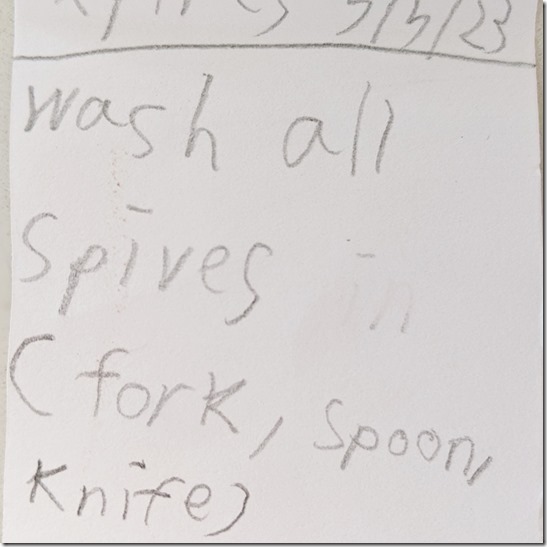 There was a coupon for a million dollars in the mix…but it expired in November of the year 1100.

That day we also visited Kevin’s parents, who had us build a kayak in their bedroom, then my parents’, where Poppy juggled flaming torches on the lawn. You know—normal Mother’s Day stuff.

For a thank you card, Kevin’s mom sent us a 3-D paper kayak with a print-out of her head inside it. Unfortunately, Kevin tossed it before I could get a picture, but I do have this other equally fabulous thank-you card she sent for something earlier in the year.

Other haps from the past couple weeks:

The excitement over Vincenzo getting his license and going places on his own has dimmed. Yesterday, an hour before dinner, I caught him sneaking out to the car. He was going to Wendy’s to get a snack, but he promised he’d still be hungry dinner. His “snack” was a double cheeseburger, a cheeseburger, fries, and a soda. He did not eat dinner. Too much snacking, apparently.

This morning I found a giant stack of old assignments in Rocco’s backpack. Most were done with minimal work—just an incomplete sentence or two where the teacher had left a paragraph-amount of room. Then I came to Rocco’s “Delete 3rd Children” campaign, which he poured a lot of effort into.

And finally, in a rare of act of Doing Something Different, we visited our dear friends in St. Louis. We went to their daughter’s softball game, played around at the City Museum, and snuggled with their cats. Basically, we cheated on our own kids.  But actually, the whole weekend felt like a date, especially the part where we threw axes.

(Kevin’s weapon of choice was the balloon pump.)

Thank you to everyone who hung out with our own kids while we were gone. Thank you especially to my mom, who followed the detailed directions I left to bring Rocco to a birthday party a whole day early.

Leo wanted to do student market with the family again, which made us all groan, but he was so excited for it that we had no choice but to comply. Plus, we’re all a little afraid of him. 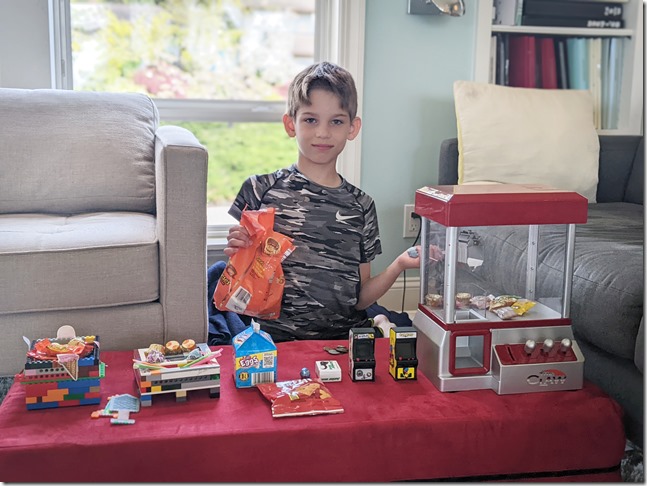 Rocco sold a variety of goods from the Asian market:

He said he’d raffle it off. He didn’t print tickets or anything because that would have taken effort, so he said he’d keep track of them in his head.

I forgot to take a picture, but Kevin set out a bunch of cups of popcorn and sold scooter rides (which is a topic for a different post). 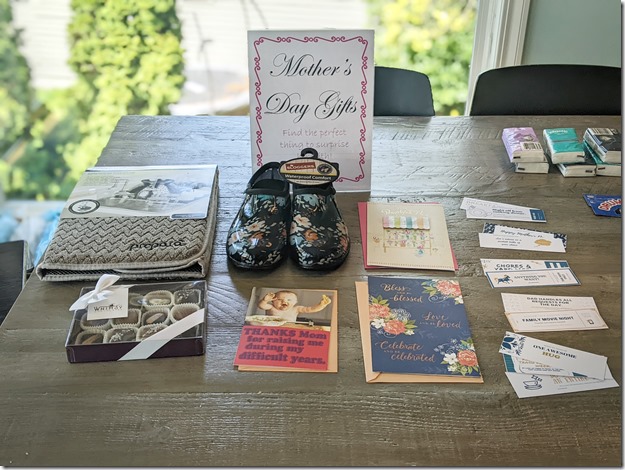 And because I’m not totally evil I also sold ice cream Drumsticks.

At noon sharp, Market opened and the shenanigans began. Rocco traded Vincenzo a mochi ice cream for four Milkita tickets. Leo tried to buy a popcorn from Kevin. Kevin said the popcorn was just for him, but if Leo would like a scooter ride he had several available. Kevin bought 50 chances at the claw machine and won several Milkitas. Vincenzo offered me 5 Milkita tickets for a drumstick but I no-deal’ed him until he got up to 4 million. Rocco realized his four raffle tickets were now worth nothing and immediately invented Scamcoin, then offered 5 million Scamcoin for a drumstick. Thusly, the trading continued until there was a fairly even distribution of Minisoft ice cream cones between the five of us.

But you know what no one would buy?

That’s right. Not even the FREE HUG coupon. Not even after I gave them a bag of quarters and told them everything cost a quarter. (“Thanks for the quarters, Mom!”)

As Market came to a close, Vincenzo bought 100 million of his own raffle tickets, ran the raffle, and won his Milkita. He went to claim his prize only to find that someone had sneak-eaten the Milkita and left only the wrapper. 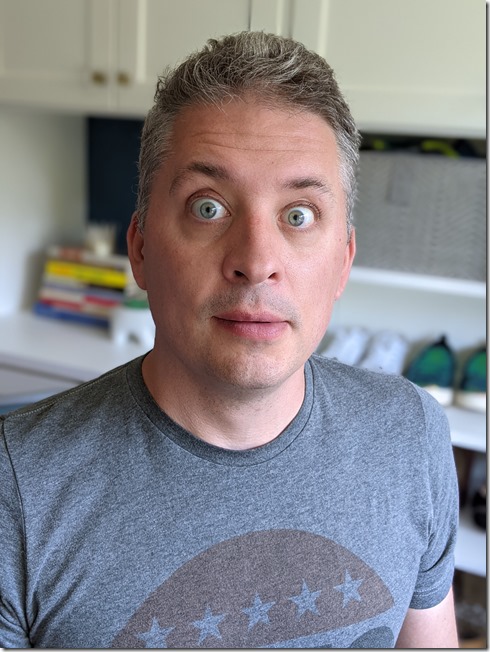 Well, Mother’s Day might be a bust, but on the bright side, we may have ruined Market enough that Leo won’t ask for it again.

I think I’ve blogged about my giant hiccups before. They’re not really hiccups. Hiccups are cute but mildly annoying little things. What I get are these giant SQUAWKS that make everyone in a restaurant turn and look. They don’t feel great, either—like my throat is a squeaky toy someone keeps stepping on. They sometimes get so bad I can’t read aloud to the boys at night because my throat is just too worn out.

It wasn’t just my throat giving me problems. I was having a lot of muscle pain, too. First my calves…then hamstrings…then glutes…then hip flexors…then shoulder…then lower back. Some days I couldn’t even go for a walk, my hip flexors hurt so much. I was still able to eke out a workout at the gym, but my exercise list was shrinking by the week.

I left pilates with Kevin one Saturday in March. Pilates is something I do in between gym days because it’s so much easier on my body, but that day I had barely made it through the workout. I didn’t mean to, but I let out a sob. “I just feel like I’ve been beaten up.” “What hurts?” Kevin asked. “Everything.” Everything

I’ve been to regular doctors, naturopaths, and therapists. I’ve done physical therapy, had ultrasounds, X-rays, and MRI’s, an endoscopy and a colonoscopy, and tried every treatment the experts recommended except the metal detoxins footbath, but in the end they all said, “I can’t find anything wrong.” They also said they’ve never heard of someone SQUAWK like that before.

Kevin, engineer that he is, tester that he is, convinced me to do a gut intelligence test. He was so optimistic. I was so without hope. But I sent off a blood sample and stool sample anyway because Kevin is hard to say no to and because bleeding and pooping were two things I could still do.

A few weeks later the results came back (I went through Viome) and showed that I shouldn’t eat tomatoes, cucumbers, or turmeric. They also showed I should limit sugar to 1 teaspoon a day, limit my intake of fatty meat, and not drink too much caffeine, which made me skeptical. That’s not personalized advice; that’s the curriculum of a fifth grade health class!

Except that…it did work. Two weeks after stopping cucumbers, turmeric, peppers, and tomatoes my hiccups all but disappeared. I sat cross-legged on the couch one afternoon. Cross-legged! Can you imagine? Feeling brave, I went for a walk. I started out in my slow, granny way but then got bolder and bolder until, unbelievably, miraculously, I was walking briskly!  The next week I tried running. Readers, I can run. I can run!!!

It feels like I’ve traded in my body for a new one. Like I reversed time. Like I tossed my crutches into the bushes and ran down the road, yelling, “I’M FREEEEEEE!”

I’ve never been happier for Kevin to be right.

Not all my problems are solved. I still have some muscle stuff going on and have to be careful. It’s become extremely difficult to eat at restaurants with my list of things I can’t eat (I also can’t do citrus, coffee, and a few other things). I’m still three inches shorter than I’d like to be. Kevin has more work to do.

But I am up and running again, all thanks to this guy. My hero. 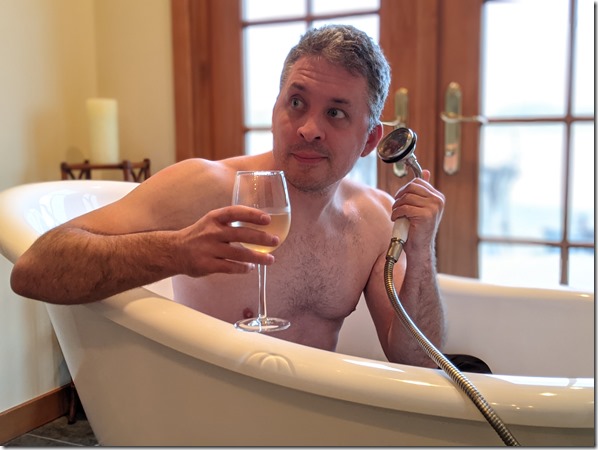 Maybe not the best picture?

This guy. My hero.