I’ve noticed of late that people are afraid to ask me how the novel’s going. They ask it quietly, like they’re giving me the chance to pretend I didn’t hear the question if it’s best for everyone. They ask it like they are holding out an apple to a horse with very sharp teeth. They ask it like you might as a doctor, “So, how bad is it, Doc?”

But they ask it, and for that, I love my people.

So…how is the novel going, you ask?

Well, today is your lucky day because last week was a great week of writing! I’m working on the third draft and every chapter I opened turned up a handful of gems I’d stowed away and forgotten about. Editing was easy, even…enjoyable last week. Had I happened upon a meadow full of daisies, I would have slipped off my shoes and danced in it.

I can’t believe I’m saying that! Normally, writing feels a lot like punching myself in the face while also yelling, “Punch harder! Do it right this time!” I remember telling Kevin on Monday, “I don’t want to write because I’m in a good mood, and I know I won’t be after I write.”

In July I attended a virtual conference where I heard dozens of other authors say, “This is haaaaard!” One of my favorite authors (Grace Lin) said her family said she’s always in a bad mood when she’s writing a novel. Another favorite (Mac Barnett), whose books are so light and hilarious I imagined him tossing back cream sodas and laughing himself out of the chair the whole time he writes—he said he hates writing. It’s the worst. It makes him miserable. But he loves when it’s all said and done.

After hearing so many writers say that writing is hard, it often isn’t fun, that they hate what they write most days, and that they are emotional basket cases—well it made me feel so normal.

I’ve learned so much about myself in the past three years since I started writing the novel. Mostly, that it takes more than three years to write a novel. And that is hard for someone as goal-oriented and impatient as me.

I’ve been learning to throw some just-for-fun writing into my week and not berate myself for taking that time away from the novel, because that’s the stuff that keeps it fun. Until recently, if the writing was ever too fun or not hard enough, I wasn’t really counting it. Now I’m absolutely counting it.

Like when I saw Mac Barnett at a (different) conference and my illustrator friend, Leanne Hatch, slid over her phone showing the sweater he was wearing on a Gucci website, listed for $$$$. I couldn’t help myself. I wrote a picture book called Mac and the $3,000 Sweater, and that same friend made a picture for it.

(Did I include the word “incredibly” in front of “talented?” She keeps winning awards and I’m completely in awe of her.)

Even though this is not a book that would ever get published (and you should know that anytime I say that, part of my brain is saying, Yes it is. It totally could be. It absolutely should be!)—even though it’s not, I made it! Out of nothing! And my friends and I giggled and giggled about it. And one of them made something else! And I had a good week of writing.

My hobbies and to-do’s are overwhelming me lately, so instead of writing a post about how overwhelming they are (because that sounds overwhelming), I’ll just post pictures from a photoshoot I did last week of the lovely family that let me take their pictures a couple months ago. They are so beautiful, it makes my job easy! 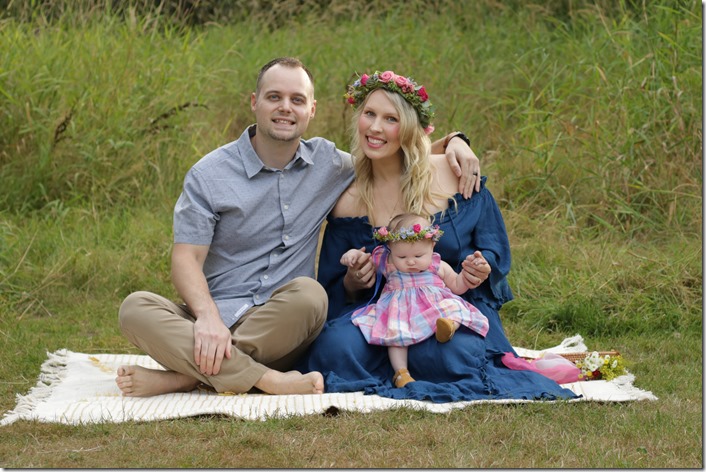 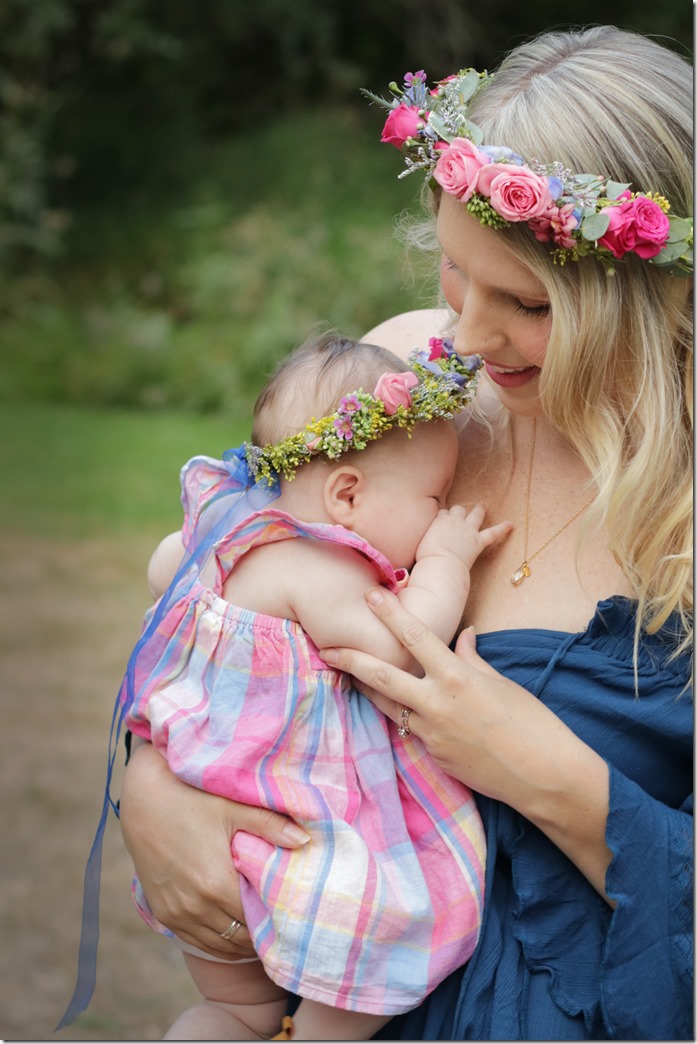 My boys are very chart-driven. When I printed out the 1,000 minute library chart the first week of summer, they’d come into the kitchen, say, “Hey Google! Set timer for 5 hours!” Then they disappeared into their rooms for 5 hours. After four days of this, they had finished their charts and were asking me to print new ones.

Nonetheless, there is a chart.

(Maybe next time I’ll make him a “neatly coloring in squares” chart, as that seems more prudent at this point.)

Now we sit, laptop to laptop, and write together. It’s a dream come true. Occasionally I look over his shoulder to see what he’s working on. He’s mainly typing in all the stories/paragraphs he wrote in school last year, so it’s really just typing practice., but still. I’m no longer writing alone. There is someone else struggling right beside me (mainly because he can’t find the letter “p” or something).

Here’s my favorite line he’s written in one of his MeowMeow stories:

The fish held out a ice cream cone and a coconut. MeowMeow ate it (everything but the fish).

And here’s a favorite from his piece on brains:

Or, er, maybe the next chart should be for plagiarism points?

We told Rocco he couldn’t have a party because of quarantine.  Instead, we’d go to the beach in the morning, then his friends could drive by and wave in the afternoon. Rocco was bummed out, but he understood, in his typical, roll-with-the-punches way.

And then, the day of his birthday, when we got to the beach…SURPRISE!

(The actual surprise part was a lot louder and more violent than this picture shows.) Yes, his birthday present from us was a small breach of quarantine.

It was 9AM. It was cloudy and cold. But within five minutes of getting there…

The words “relaxing” and “day at the beach” do not go together in any way when it comes to my boys and their friends.. 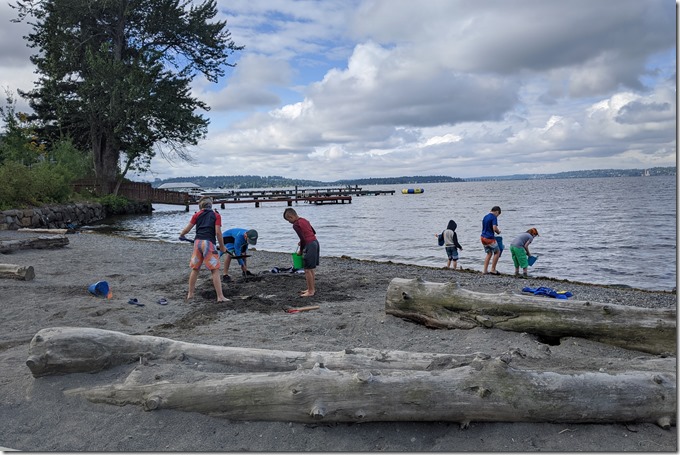 They really earned their Twinkies that day! (Yes, folks, instead of making a cake, I bought pre-wrapped Hostess treats. Look what you made me do, Covid!)

When I got pregnant with Rocco and realized he’d have a summer birthday, I was a bit sad for him, that he wouldn’t get to bring cupcakes to class on his birthday or to feel that he was king for a day, and that that they wouldn’t read his name over the announcements while his pals all slapped him on the back.

My lamentations were unnecessary–this kid doesn’t look like he’s missing a thing. 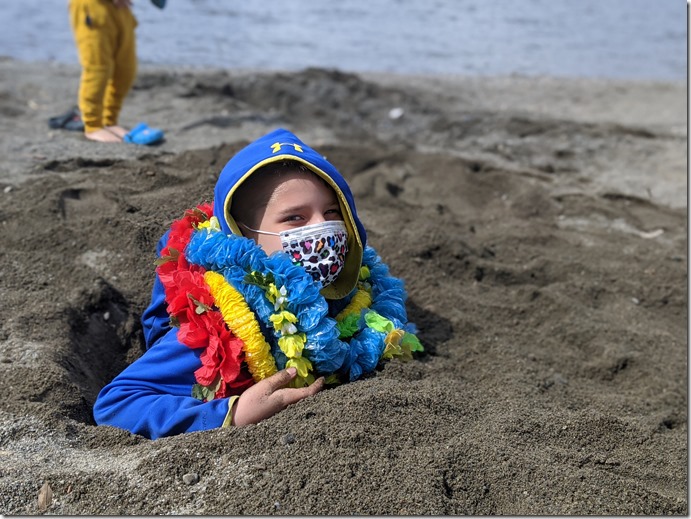 Except his lower half, of course.

Sometimes I wish I were my own kid.

WHAT’S COOKIN’ 2NITE:
Chicken enchiladas
Rice
Refried beans
PB Rice Krispie Treats, if any of my kids can pull themselves away from video games long enough to make them