This year, unfortunately, my boys wanted to be Minecraft characters and, as I keep whining about, Minecraft has not sold themselves out to every possible merchandising opportunity out there, which makes them a scumbag company in my book.  It means I had to make my boys’ costumes this year.

And then it took forever again when I finally faced the fact that it was definitely going to rain on Halloween and I had to cover every inch of these masks with clear contact paper or they would return from trick-or-treating wearing plain boxes on their heads.  There is a very fine line between being a Creeper and being a kid with a box on his head.

The boys are: a tamed wolf, a Creeper, and a zombie.

Actually, Rocco really went more as a sexy creeper, as this next picture demonstrates.

Anyway, on no other night of the year would I put a box with two tiny eyeholes in it on my young children’s heads and tell them to walk around the neighborhood on a pitch black, rainy night.

Maybe Halloween isn’t the miracle holiday I made it out to be earlier this week?

Nah.  It totally is.

Okay, readers, we are getting close to the finish line with the Big Boy room.  Here’s what we’ve got so far:

Okay, so it doesn’t look like much but this represents a solid month of weekends spent painting, skim coating, repainting, trimming, buying, assembling, touch-up painting, and moving of stuff from one room to another.  Not to mention the hour it takes me to clear things off the bed and desk to actually take these pictures!

But I need some advice on the desk area.  We bought a bunch of magnetic boards to hang above it and will buy some white cabinets to hang above those.  Here’s the general idea:

The question is this: do we leave the magnetic boards silver, as they are, or should I cover them with lime green cloth?  Here’s the general idea (the board will be centered over the desk):

Here’s a really crappy Photoshop attempt to show about what it will look like green, though I would do more of a chartruse than a grass green: 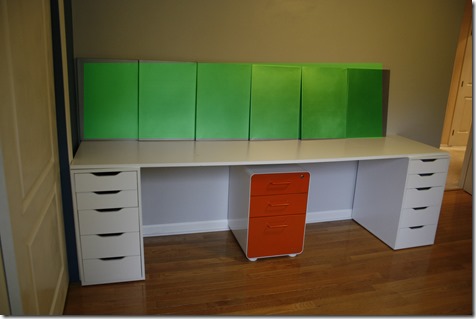 What do you think?

It was Pumpkin farm weekend for the MrsMouthies!  Here are a few of our top moments: 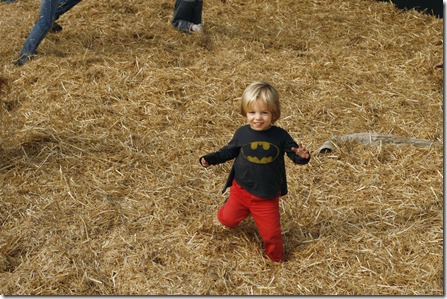 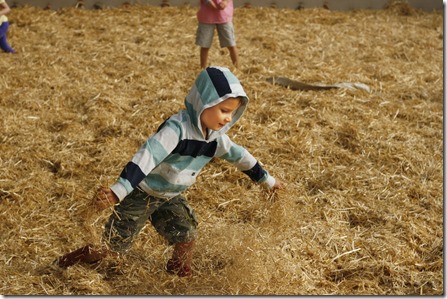 Actually, Vincenzo’s glam shot looked like this—we’ve been too busy to get him a haircut.

But who needs haircuts when you have Photoshop?  Anyway, to continue… 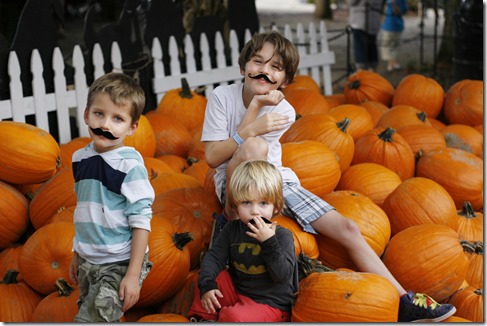 The kids played in the hay, went in the bouncy houses, ate kettle korn, looked at the animals, rode the train and canoes and roller coaster, putted around in the old timey cars…but the one thing they didn’t have time to do at the pumpkin farm was ride the wagon out to the field to pick pumpkins.  Oops.

To end on a funny note, here is my second favorite picture from the pumpkin farm:

I love how he tilted his head just so.

…and my favorite picture of the day, from my mom’s collection: 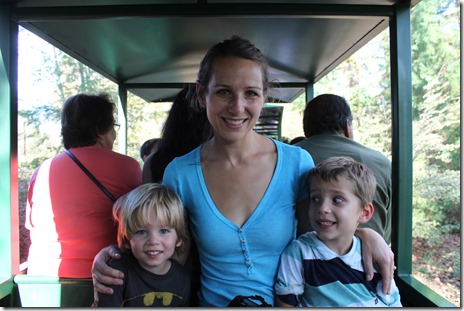 I used to have a cat. I loved him more than I loved my children. Of course, I had no children at the time, and lucky for them.

This fluff ball turned grew into one of those super silky, soft cats who flopped like a rag when you picked him up and who felt like he was weightless when he jumped onto your lap. His name was Rocky.

At Christmas time we’d send out cards with his pictures on it. In summer I’d put him on a leash and try to walk him. When he got his man-cat parts chopped we even threw him a Ball Voyage party.

(One of the food tags from the party)

My SIL found a little replica of Rocky that she gave us.  We named him Bizarro Rocky.

Bizarro Rocky was present at the birth of our first son, naturally.

Sadly, the real Rocky died of a lung infection when he was just four years old. Around that time, a very mangy version of Rocky showed up in the neighborhood—he was ratty, his tail looked half-eaten, and he seemed to be missing an eye. We named him Pirate Rocky.  It is comforting, somehow, to see Pirate Rocky roaming the neighborhood from time to time.

The other day the boys were downstairs playing and yelling at each other when the yelling got louder than usual and turned to all STOP! LEO! NO! NO LEO! LEEEOOOO! OH NO NOW YOU BROKE IT!

Then Rocco* came up the stairs carrying this: 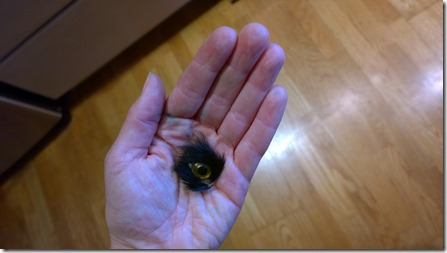 (Technically he was just carrying the thing on my hand—not my actual hand.)

But as they say, one cat’s eye is another man’s treasure and I have taken to wearing the eye around myself in a version of me I call Bizarro Mommy.

Bizarro Mommy gets to do anything she wants, any way she wants.  I’m sure you haven’t seen the last of her here.

*I should point out here that we did not, in fact, name our son after our cat.  Rocco was named after his father, whose middle name is Rocco, and his name was chosen because Kevin’s dad really liked the Rocky movies.

Thanks, Tricia, for the suggestion.  To add onto yesterday’s post:

5) What do you do when your husband asks for this 7-layer Pop Rock cake for his birthday?

You tell him absolutely not; that is a completely ridiculous request.  Then you make him this 6-layer Pop Rock cake for his birthday.

(Each layer is sprinkled with a bag of Pop Rocks, the outside is covered in Pop Rocks, and the recipe calls for TEN POUNDS of frosting.)

1. Kevin’s parents gifted us with a pose-able skeleton for Halloween.  Rocco spent five minutes outside with it and I found Skelly looking like this: 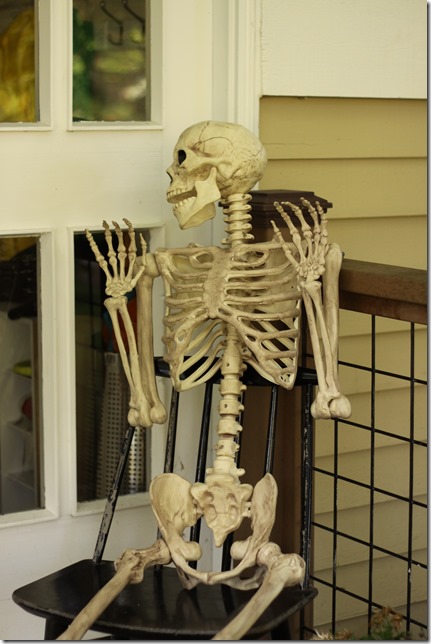 Skelly totally gets me–that’s the same way I feel when I spend five minutes with Rocco.

2.  Vincenzo just finished his thank-you cards.  You don’t need to read them but just look at their overall style:

I just love how very Charlie Brown-ish they look.

3.  Last week Rocco’s voice was a little hoarse.  Kevin’s dad asked if he was sick or something and Kevin said, “Nope; he’s just been talking for the past five years.”

4.  Vincenzo closed a book he had been reading all afternoon.  I asked him if he finished it and he said, “No—I just turned it off.”

It feels weird to end on #4.  Does anyone have a #5 to toss out there tonight?

5. This last one, unfortunately, is the most common version played in our car and the reason I HATE the game of I Spy more than anything else I’ve encountered in all nine years of parenting:

(At which point Mom loses it and goes off the rails *a bit* and makes the kids promise they will never, ever, ever attempt to play I Spy EVER again.)

WHAT’S COOKIN’ 2NITE:
Fresh spaghetti and meatballs, made by Chef Rocco (and his sous chef, Mom)
Crudites (i.e. sous chef was either too lazy or too busy to actually cook the vegetables)
Thunder cake