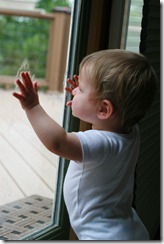 So the other day I lifted Vincenzo out of the tub and set him near the dry towels while I went to nurse Rocco.  The entire time I was nursing, Vincenzo whined and cried because he was wet and cold.  I kept trying to walk him through the steps of drying himself off in a towel, to no avail.  Crycrywhinewhinecry.  By the time I made it down to help him he had air-dried so the towels were no longer an issue, but by then Vincenzo seemed to be sixty seconds away from actually starving to death.  So hungry was he that he claimed he couldn’t even walk to the kitchen table and demanded I carry him.

Soooooooo…
Mean Mommy: You’re telling me you’re too weak to walk ten steps to the table for food.
Poor starving child:: Yeeeeeeeeeesssss.
MM: Even if there were a popsicle sitting at the table, you’d be too weak to get to it.
PSC: [considers]  Yes.  I’m too weeeeeeeheeeeeeeeak.
MM: [considers]  Well let’s put that to the test.  I’ll go put a popsicle at the table and we’ll see if you end up making it there to eat it before it melts.  If you don’t make it, we’ll know you were that weak from hunger and from then on I will always carry you to the table whenever you’re too weak to walk.  If you do make it to the table and eat the popsicle, we’ll know it was all just in your head.

About ten seconds later, Vincenzo was at the table chowing down his popsicle while his mother sat beside him, gloating.

Does anyone else’s weather forecast look like this and has it looked like this for the past six weeks?*   Note that the temperature showing is the high of the day, not the low.

*The original icons showed “partly sunny” as a sun peeking behind the clouds but as the sun has not done any peeking for quite some time, I added some accuracy into the weather report.

I don’t know if I’ve written before about Vincenzo’s grandpa being a juggler.  We joined him this week and despite the rings, clubs, and balls laying around, my dad went for something a little more flammable.  Specifically, fire.

Look at him—cool as a cucumber, catching twirling-burning torches while reciting the periodic table backwards.

“Look, I even still have my eyebrows!”

“Look!  I still even have both my arms!” 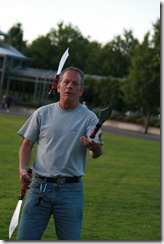 Vincenzo went straight for the rings.  He started with one… 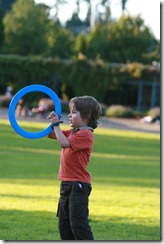 and here he is with three rings.  But only literally.

Even Rocco got into the rings!  Also literally.

But he quickly moved on.

I wonder what Poppy will juggle next week.  Maybe hand grenades?  Or arsenic?  I’ll keep you posted.

It has GOT to be hard to be a baby.  All these pictures were taken in about 20 seconds, in this order, and what an emotional roller coaster those 20 seconds were for my 10-month-old.  I’ll try to label them but honestly I don’t think there are names for quite all of the emotions demonstrated here.

Stressed (“I know you’re taking pictures of me so why am I still hungry?”) 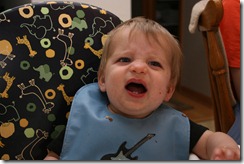 Never mind—this one’s pissed.  The last one was kind of cheerful next to this one.

OMG did I just see a boob?! 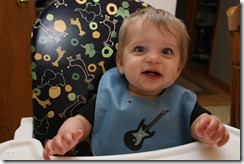 (Yes, that’s an official, certified emotion.)
(Just take your shirt off in front of your husband if you don’t believe me.)

In the middle you notice a dark spot.  That’s an ant.  It’s the ant that almost made us miss our flight home from Chicago last week.  And it totally wasn’t the ant’s fault.

But is it normal for a boy to throw an hour-long temper tantrum because Mom and Dad wouldn’t drive back downtown to get a leaf he had seen in the middle of the road?  An HOUR of screaming.  Is it normal for that boy to sit in the bathtub screaming for another hour one morning because he wanted Dad to come home from work RIGHT THEN to see a specific bubble?  An HOUR.  Is it normal for a boy to spend an entire bath rescuing pieces of the sticker from his soap bottle that had flaked into the water and storing them in a tupperware?  Most of which were no bigger than a pencil dot?

Back to the ant.  In Chicago Vincenzo had started a collection of slugs and potato bugs, and as we were loading up the car to return home he spied this ant.  He couldn’t catch it.  He asked us to catch it.  We wouldn’t.  He started in on one of his raging temper tantrums and, in desperation to make it to the airport in time, I ended up taking a picture of the ant that I then walked back to the potato bug home to hold up to the potato bugs so they could see the ant that could have joined them.

I nearly plucked my own eyeballs out.  And Vincenzo skipped merrily to the car.

Fortunately, thanks to the wondrous miracle of DVDs and Cheetos, we had a nice plane ride home,

…until we debarked the airplane and he spied a mud puddle outside that he fell irreversibly in love with and there was much screaming and rending of clothes because his parents were not willing to spend the night at boarding gate A8 so that our son could gaze lovingly at Puddle.  Call me Cruella.

We have an old camera and an old Flip we let Vincenzo use so he can take pictures of all these things he falls in love with.  Sometimes it works.  Sometimes he’ll be videotaping the clouds and ask us to take over for him so he can play.  (We say no.)  Sometimes he still cries because it’s not the same having a picture of a particular water formation on the bottom of his bathtub as actually having it IRL.

Should I mention now or later that *certain* family members (ahem*not me*ahem) seem to have some OCD tendencies and a stubborn streak that would put a herd of wild mules to shame?  And that I have box after box of every note and letter anyone has ever sent me from the seventh grade on?

This kind of shooting does not involve the usual array of lasers, sticks, squirt guns, and variety of imagined shooters that Vincenzo has in his arsenal.  My BIL let me play around with his equipment (get your mind out of the gutter, Casey) in his studio.  In fact, there’s a good chance he actually took all these pictures.  But I was standing right next to him when he did!

And, as promised, here is a link to the pictures from my SIL’s wedding.  This is the “mini slideshow” the photographer sent out.