We spent Memorial Day at our family’s Whidbey beach house. We still kept to ourselves; we just did it in a different living room. Normally the beach house runneth over with cousins, aunties, uncles, and grandparents, so it was a little weird for it to be quiet and for each of us to have a bed to ourselves.

Normally we don’t have Internet access (or even cell phone access) at the cabin, but over quarantine we sprung for WiFi. I have mixed feelings about it. One of the magical things about the cabin is the lack of on-line stuff, which forces us to play board games and read books and pull out a random assortment of ancient racquets and balls and challenge each other to a game of EverySport.

But now there was some of this mixed in.

(One can only assume the are watching a V-8 commercial.)

I made it feel okay by making a rule that we could only play archaic games from the 80s—ones I used to pay on the Commodore 64. Choplifter, Moon Patrol, Spy Hunter and Paperboy, to name a few.

The graphics might not be quite what they are today, but the sound effects are way rad. Pew! Pew! Pew! Kkboom! Sproing! Srpoing! 100% satisfying.

Kevin and I took a looksee in the garage, which I blogged about years back. To update, the wood paneling got installed in the garage but the 1,000 pinkish carpet squares (actually not mentioned in previous blog) are still stacked in the middle of it, taking up the space of a mid-sized SUV. We were excited to find a box of masks laying on the shelves, unopened. A gold mine in The After times!

We tried them on right away. 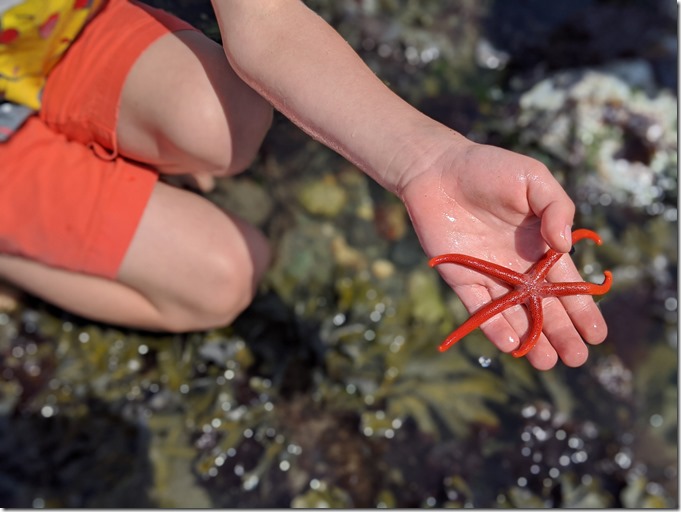 Vincenzo found a coconut on the beach, which Kevin dubbed Captain Whidbey’s Nut.

The boys spent a good deal of their time building driftwood forts on the beach. This guy showed up to help.

Usually I’m the photographer of the family, but for some reason Kevin really wanted to take a picture of me on this bluff.

Anyway, now I’m back home, being half Mom, half teacher, half author (we’re studying fractions this week) and feeling like I’m not doing any of them really well. Only now, when the kids yell up, “Mom! The website isn’t working!” I just go all glassy-eyed and remember that for one weekend, at least, it didn’t matter if the gol-darn website wasn’t working. 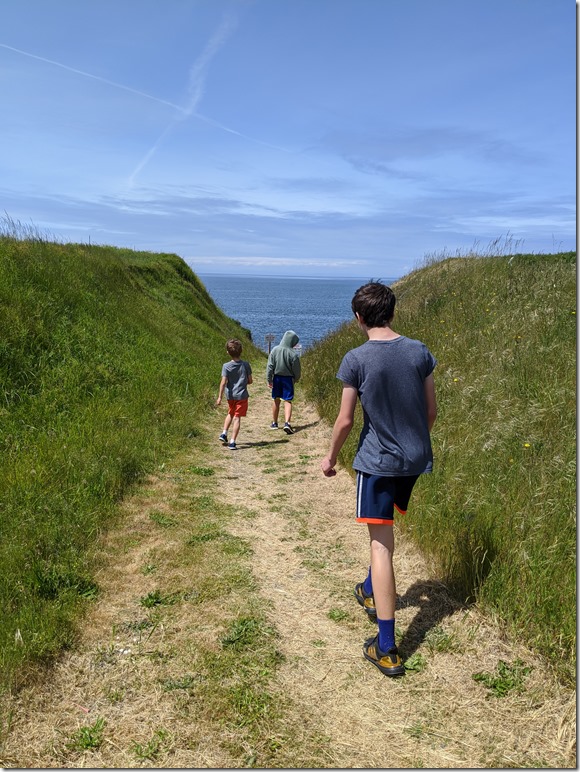 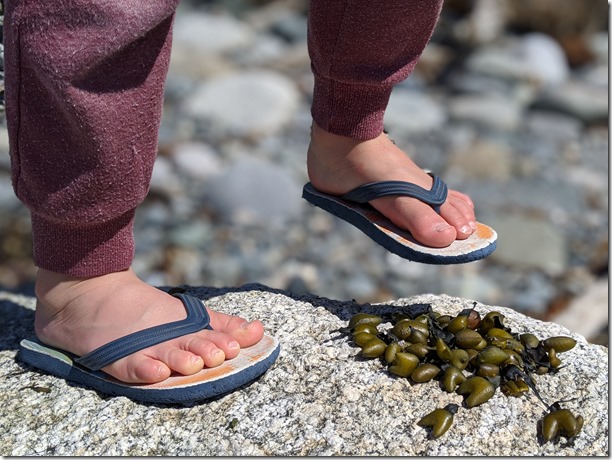 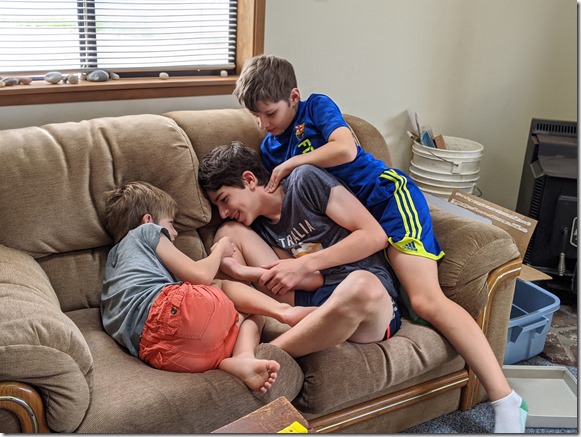 The boys’ school had a virtual talent show and so I present to you a magic act, brought to you by my boys and the Coronavirus. The lighting is almost as bad as the singing, but the punch line is worth it.

WHAT’S COOKIN’ 2NITE:
Salmon chowder (which, Rocco informed me at dinner, is his third favorite chowder, which led us to ask Google how many kinds of chowder there are, which she responded to by telling us about eight different kind of showers, which led us to all pick our favorite kind of shower. Kevin’s is electric. Mine is wedding.)
Whole wheat no-knead bread
Golden kiwi
Chocolate cake and ice cream

Kevin: But all my friends are doing it.
Me: If all your friends licked the handle of a grocery cart, would you lick one too?
Kevin: Does it taste like Arby’s?

Since quarantine, we’ve only eaten food that I’ve scrubbed clean and/or cooked, except on Angelo’s birthday (burgers and shakes for Angelo, removed from their wrappers with gloved hands and put on clean dishes before eating). I told Kevin if we’re going to risk extra human contact for some take out, it’s not going to be Arby’s.

But later, I felt bad. Kevin looked so sad and lonely during the Zoom meetings. So I relented. 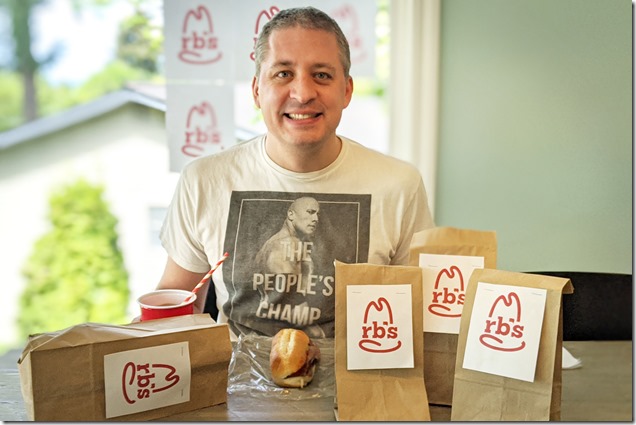 When I married Kevin, I never dreamed my new initials would be called on for such an important and topical use some day.

The other day during read aloud, the word “hermit” came up. The boys wanted to know what a hermit was. I had no problem describing one.

Sometimes I can’t even bring myself to tune into a Zoom meeting with friends because the boys and I are playing our 100th game of Monopoly Deal for the day (which, by the way, is 100 times better than actual Monopoly), or we’re yelling at each other and setting things on fire in Overcooked, or we’re watching Teen Titans Go together and it’s a really good episode. I’d rather keep doing that, even though it’s the exact same thing we were doing the day before…and the day before that…and the day before that…

I’m supposed to be tired of cooking, but I’m not. In fact, I’m finally doing the right amount of cooking.  Apple pastry for breakfast, baked potatoes with creamed eggs for lunch, Pad Thai for dinner and Boston cream pie for dessert. Somewhere during the day I’ll also toss in a loaf of bread for the week and maybe some crackers made from our sourdough discard. This spring, we have eaten exactly zero dinners out of mason jars, squeezed between two soccer fields in the rain. Zero!

With the quarantine starting to phase out, I’m catching glimpses of the gigantic to-do list on the other side. It’s not like we’re going to say, “We really learned something there. Let’s keep life simple from now on.” Nope. It will all come back: the overladen schedule, birthday parties, sports, dividing and conquering, evenings too busy to play a game together, weekends gone to birthday parties, family obligations, church, date nights, girls’ nights, sleepovers, and soccer games. The expectation that I should have spent xx hours a day writing and I should have xx pages to show for it. (During quarantine, if I get any writing done it’s a, “Yay! Bonus!” kind of feel.)  School dances, science fairs, orthodontist and dentist and doctor appointments. Bagged lunches, rushed mornings. Therapy appointments, PT, and root canals. That’s what waits me on the other side.

The thing is, except for the doctor appointments and root canal,  I love all the stuff in that paragraph.  I signed up for it all! But now that I’ve seen how life can be without all that, it’s going to be hard to go back.

We spent a whole day this week defending baby robins from a murder of crows. We go for family walks around the neighborhood now, stopping to chat with other families who, it turns out, have been living right next to us all this time. The boys make up games in the backyard and come in laughing about how Vincenzo won because he got the Golden Sneek.

When I was a kid sometimes the power would go out, and no matter how long it was out, I was never ready when the lights came back on. I love the feeling of having to “make do.”* It fulfills that part of me that always wanted to be a pioneer woman, raising my family in the middle of nowhere, filling the days with good, hard work that, in turn, would fill me up a sense of purpose.

So can we all just agree to do less of the other stuff and more of this for a little while longer? As in, like, forever?

Because this page from my mood chart is my new favorite.

Only I don’t think they got it right. Let me make a little adjustment… 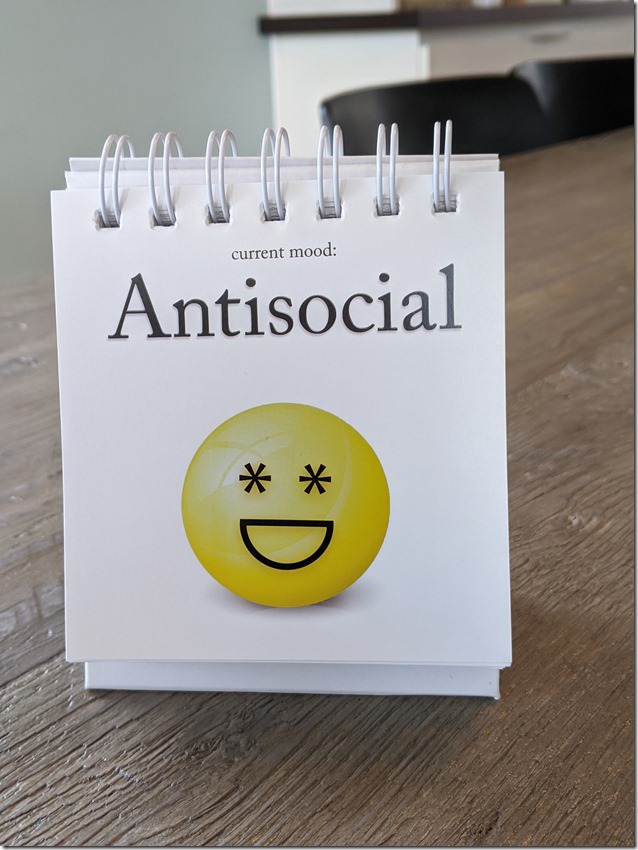 (And all these years I thought I was an extrovert.)

*I do understand that there are limits to this. All the times I’ve had to “make do” my well-being has never at stake, and I know not everyone has that same luxury during quarantine.