Rocco’s 12! Since no one has any infections anymore, I have time to blog about it. I will begin as I begin every birthday blog for Rocco: by saying how much he talks. He talks so much! About anything and about nothing—about all the things. The letters TMI have no meaning to him.

Even though he is the wizened age of 12 and heading into middle school, he plays with Legos more than ever.* For his birthday we got him supplies to build a Lego table.

We’ve always wanted to have Lego bricks sorted by color but I did that once when the kids were little and the organization lasted for 26 seconds. We’ve gotten a lot more Lego bricks since then. A lot a lot. I was not excited to put more furniture into our stuffed house, but I was excited to get rid of the 6 giant tubs of Lego bricks cluttering the basement.

We spent a couple days sorting. We got pretty good.


And voila! No more Lego mess! 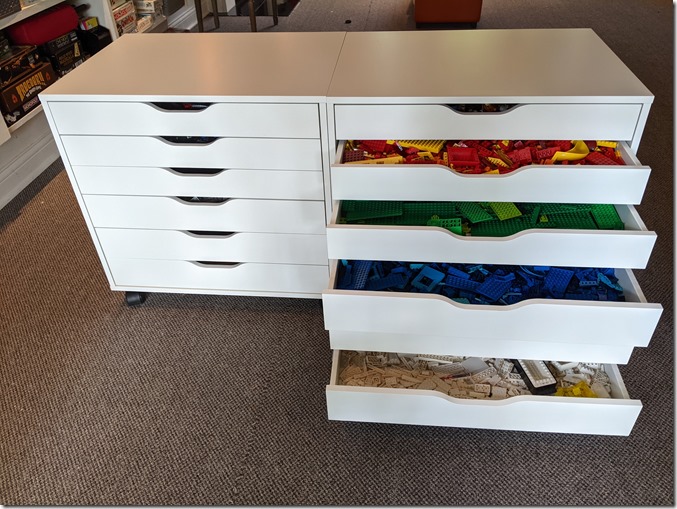 We can now live in a perfectly organized, color-coded house without Lego mines littering the floor!

Lately he’s changed his focus to gathering parts to build a Lego set without actually buying the Lego set. He finds a piece on Brick Think for 12 cents and is all excited until we tell him shipping is $5.00 and it will also be $5.00 for all the other 150 pieces he put in his basket. He’s only slightly less excited. We do the math for him. He puts another piece in his basket. We explain again. “Only 465 pieces to go!” he says. We give him a full-on economics lesson with charts and diagrams and sound effects and ask if he understands. “Yes,” he says. We breathe in relief that we got through to him. It took a lot, but we finally turned him around. 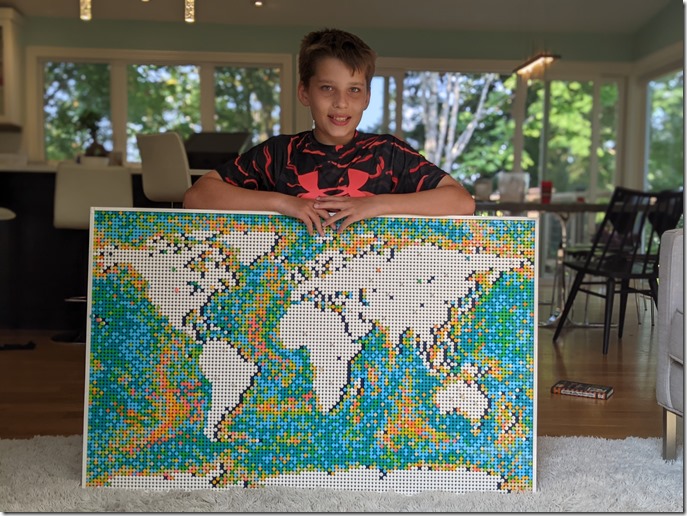 Rocco is the one kid who sometimes says “yes” when I ask if anyone wants to go for a walk or bake cookies or pick blackberries. Actually, he’s as obsessed about picking blackberries as I am. He understands the joy of finding the perfect patch. It’s much like finding an obscure Lego piece on-line. He gets it.

He played four roles in the school play, which suited him perfectly as he has the energy of four people, plus extra.

You may be surprised to learn that Rocco is a taker of gigantic bites of food. He literally bites off more than he can chew. He puts a huge piece of steak in his mouth, pushing it in with the food jammer, which most people call the pointer finger. “Small bites!” we say. Then we give him a 5 minute lecture on taking small bites, which he listens to with a sheepish smile on his face, as his mouth is so full he cannot argue back. These are the only moments in the day he’s not talking and I guess we should cherish them, but they are dampened by watching our kid struggle to make a fist-sized piece of beef fit down his throat.

What? Only a single bite of birthday cake this year?

He is a rider of  whales. 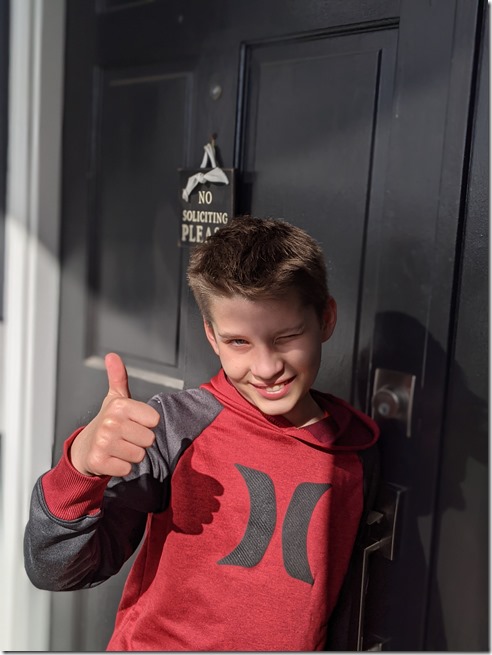 I’m not sure why I took this picture or what Rocco was doing here, but $10 says it involves soliciting.

Rocco’s favorite thing to laugh at is himself. I’ve only seen him truly upset a couple times in his life (though I’ve seen him make others upset many, many times). He still completely looks up to Vincenzo and is always inviting him to do stuff Vincenzo has completely zero interest in doing, like playing Minecraft with his 6th grade friends and picking blackberries with his mom.

He still can make Leo cry at will.

He pauses in his Lego boat play-by-play oration. “Mom, what did you like to play with when you were growing up?” I answer, and he listens. As long as you’re not trying to talk him out of something, he really listens.

Rocco is a big-hearted kid and he’s worth every minute of exasperation.

We love him to pieces.

*I will unapologetically use the word “Legos” instead of “Lego Bricks” for the same reason I say, “a whole nother.” It’s common law.

**Inside joke. Rocco will get it.

We did it! We took our first plane trip since quarantine started! I never thought I’d miss the feeling of finding the last three empty seats at a boarding gate, or the tiny bag of pretzel mix. I never thought I’d miss the tiny tray tables. Or of waiting for bags. Or of the smell of the inside of an airplane. But I did. Even though an airplane’s whole purpose is to take you away from home, once I got on one it felt like being home again—part of our bigger home, which includes our dear friends and family in Chicago.

Here is Kevin, holding a “wet big beef,” which is a lot less inappropriate than it sounds and a lot more sandwichy.

Kevin keeps insisting that now that he doesn’t have a gall bladder, his body doesn’t absorb fat so he can eat as much as he wants. He actually believes this. He is not joking.  I felt obligated to drink most of the cake shake. You know, for Kevin’s health.

We spent the next day at a water park with the Calamaras family, who is just as joyous and magical as they were when they left our neighborhood two years ago, except now two of them are dinosaurs. Wet ones.

(Not pictured: pointy teeth and sharp claws. They are implied. )

The place was small enough and the kids were big enough that the adults could just sit around talking, soaking up the sun and being lazy. But then Rocco came up and said, “You should try the water slides, Mom,” and Rocco doesn’t take no for an answer. I’m glad he doesn’t because the water slide races were super fun, mainly because I kept winning—though though I didn’t appreciate the kids pointing out EVERY TIME that it’s because I weigh SO much. 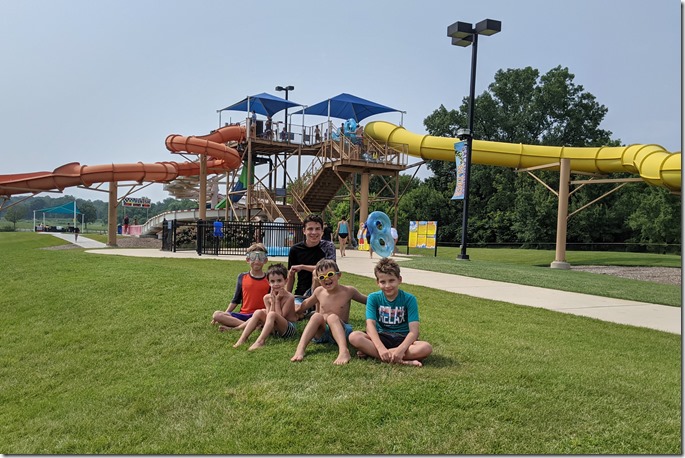 (Not pictured: really heavy Mom beating her kids down the water slides.)

No one was ready to part ways by the end of the afternoon so we moved the party to the Calamaras home, which has enough closets to fit our entire house in. Wet beefs aren’t the only thing that’s big in Chicago!

We left Vincenzo to watch the boys, who watched The Wizard of Oz, while the adults went out to dinner.

(Vincenzo made sure to watch his phone while we were gone, too.)

Over squid and pasta we started planning our next vacation together and accidentally planned a whole dozen of vacations together. San Diego! San Antonio! Alaska! Yellowstone! Italy! Croatia! Transylvania! We would have kept going but we had eaten all the carrot cake and tiramisu by then. So we picked up the boys, said goodbye for now, and drove away, yelling, “See you in the Galapagos!”

The next day we met up with the owner of the Ashley Whippet Museum, a.k.a Uncle Tom. The Ashley Whippet Museum takes up most of his basement, but don’t let that lower your expectations. It has things behind glass, bumper stickers,novelty t-shirts, knick-knacks and collectibles (both !), things behind counters and more things hanging from the walls and ceilings, just like a real museum. Which it is! (I blogged about it several years back, if you want to revisit.)

You probably guessed that we started the day by frolfing. Frolfing, I should clarify, is not a word. It makes Uncle Tom turn red and shake his fist and invoke the name of the PDGA. I may very well be banned from the sport of frolfing simply for writing the word so many frolfing times in this blog post. But hey, that’s just par for the [frolf] course!

Uncle Tom and Aunt Chris’ house is full of kids and dogs, and all of them are friendly except the one that tries to bite you anytime you make eye contact with it. (That one’s a dog named Kahlua, and occasionally a kid named Leo.) Kahlua follows you around staring up at you, and do you know how hard it is not to look at someone who is staring at you with big, literal puppy dog eyes? I wanted a picture in the worst way but I also didn’t want my face bitten off in the worst way, so instead I took a picture of a more emotionally stable dog.

That’s Aria, and she’s just as sweet as she looks.

This was only the second time our kids had seen most of their second-cousins, but they were instant friends. The recipe was simple, as it is for most instant things: just add water!

The chicken never warmed to us, but she posed for a picture anyway. (She doesn’t have any issues with eye contact.

Vincenzo spent so much time with little kids during our stay that he began wearing them as capes. 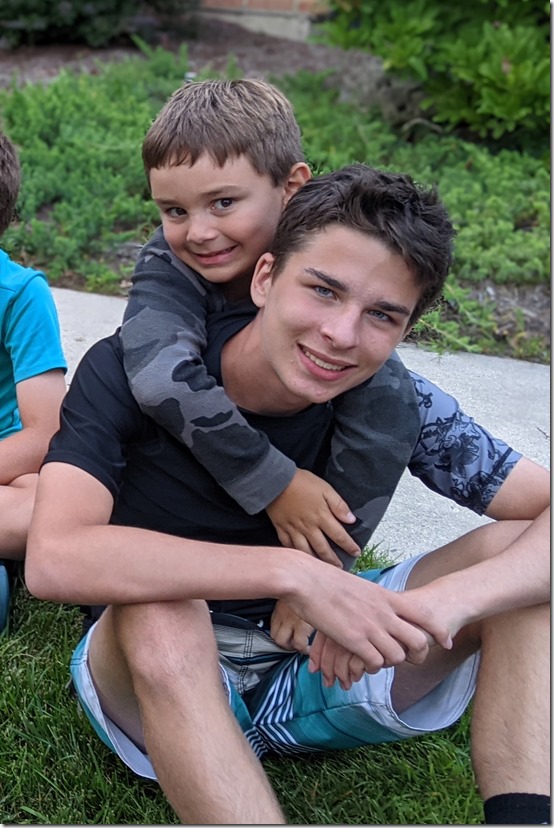 It’s the first time Kevin’s grandma (GG) was together with all eight great grandchildren, so they gathered around for a photo op. The kids wore their nicest beach towels for the occasion.

After two days of nonstop laughter, splashing, staying up late, and playing tag, we needed a little downtime so on the last day we went to the mall to spend an hour at Mish Mash, which is a combination of an escape room and American Gladiators. You know it’s been an intense vacation when plowing through vats of exercise balls and climbing rock walls feels like down time.

We finished up the vacation with deep dish pizza at Uncle Tom and Aunt Chris’ house. I wanted to bottle up the sound of the house as we were leaving. Everyone packed together, kids wanting up, kids wanting down, dogs barking, moms looking for lost shoes, dads looking for lost kids, adults finishing conversations and making plans to see each other again. 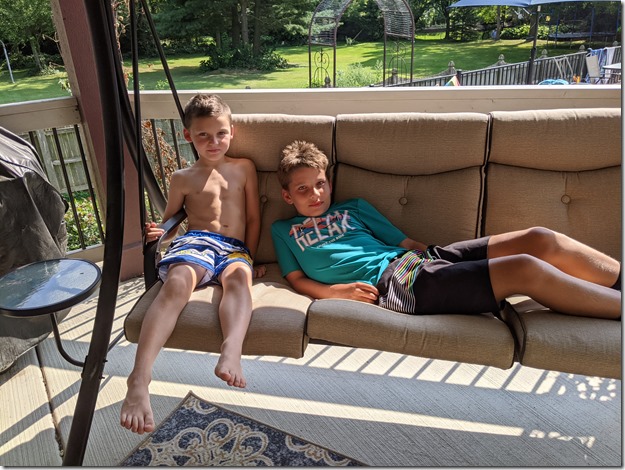 And I’m so glad to be back in the world.