I’m confused about what it means to go on a date lately. The kids are old enough that we leave them at home whenever we want to go to the grocery store or the mall or to browse statuary. We used to have to arrange childcare for this kind of thing, which made it easy to identify it as A Date. (Yes, it’s true that many of our dates involve the grocery store, the mall, and statuary lots.) It begs the age-old question: If you don’t hire a babysitter, does it count as a date?

Also, before you tell me that going to the grocery store definitely does not count as a date, what if I wear lipstick and heels and we go to the nice grocery store? What if we engage in lively banter in the bread aisle? What if he produces a dozen roses from behind his back at the checkout counter? What if we bust into the box of Drumsticks and share them together on the sidewalk outside the grocery store?

The lines are blurry, my friend.

All this is to say that we decided it was time to go on a Definitely a Date date last weekend, and fortunately there was a movie that wasn’t too scary, dark, action-y, suspenseful, post-apocalyptic, or graphic, and that left us with The Lost City, starring Sandra Bullock and Channing Tatum. One of the reviews said that the movie was acceptable—the equivalent of a microwave burrito—and that was good enough for us.

Of course, I had to find something to wear. Most of my options were too cold, too dowdy or too Chewbacca-y, so I settled on the same sweater I wore when we took the boys to see The Mitchells vs. the Machines, deciding that it wasn’t so much what I wore as the fact that I put thought into what I was going to wear.

We pulled into the parking garage and Kevin effortlessly squeezed the minivan into a tight parking spot. “You know, so you’ll see what a good dad I’ll be someday.” I nodded. “There’s only one problem. I don’t want kids.”

I also told him he should have cleaned the giant smear of bird poop off the passenger’s side window before our date. He said he thought I wouldn’t notice amidst all the scratches his wife put on the car.

Despite the date getting off to a rocky start, the movie was actually pretty good. Way better than a microwave burrito. It was more like an enchilada platter, or a baja fish taco with pomegranate jewels. (Seriously, who comes up with this stuff?!)

The movie was especially relatable because Sandra Bullock plays a frustrated writer. My favorite scene came at the beginning, where the hero and heroine are lying on a floor surrounded by snakes, Indiana-Jones style, when the heroine says something like, wait a minute, why are there so many snakes? Whose snakes even are these? What do they eat? Who feeds them? This doesn’t make any sense! And we realize it’s the author’s voice poking holes in her plot as she’s trying to write it.

This is the exact reason I glower when Kevin asks, “So, how did writing go today?”

Anyway, the movie was cute and funny and Sandra Bullock absolutely rocks a pink sequin jumpsuit (that’s what I should have worn!). We spent the ride home looking up the actors’ heights, weights, and ages and saying how awful it must be for people to be able to look up your height, weight, and age any old time. Kevin guessed everyone’s age within a year except Sandra Bullock. I’m not going to tell you her real age. You can decide to rise above the muck and not know, or join me in the mud pit and look it up. At any rate, she looks uh-MAZE-ing.

When we got home we took off our shoes, hung up our jackets, and stood awkwardly in the kitchen. I broke the silence by whispering that I was going to slip into something more comfortable.  So I did and then Kevin went to bed and I watched zoo documentaries in my polka dotted PJ’s until late.

So overall, how did the date go?

Well, we could still use a trip to the grocery store, but I think I’ll stick around to see where this thing goes.

But the forties don’t stop there! Weird medical things start happening that doctors have no cure for, like giant squawking hiccups, or an allergy to coffee, or your right nostril deciding to always have a tiny something peeking out of. The therapists of our 30s start retiring and we get new ones that are younger than us and don’t understand why we keep wanting to talk about chin hair.

By the forties, our kids’ problems are bigger than band-aids and we’ve already been to all the fancy restaurants.

And then there’s the thing that happens at the end of the forties.

Fifty looms ahead, dark and heavy and shapeless—like that thing from Neverending Story that freaked us out of our high tops in the 80s. 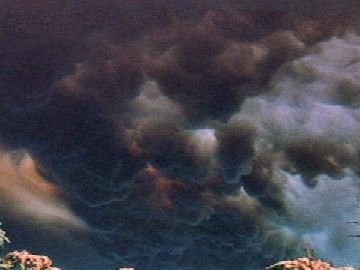 (Perhaps all Atreyu had been running from was a premature midlife crisis?)

Fifty is a number that makes you look back and evaluate whether you accomplished everything your teachers said you had potential for. The number fifty is coming, and it wants to see your work.

The OCD Workbook 2.0 I’m reading says to live in the present. Anxiety and worry only apply to the future. It’s when we think about things that could happen that we feel anxious. The solution is easy: Stop thinking about the future.

(I’ll wait for the laughter to die down.)

For those of us who are always balancing on our tippy-toes, trying to see a little farther, it’s impossible not to think about the future. But maybe we could look ahead a little less often. Maybe, optimistically, a lot less?

So when I was cooking dinner the other night I took a moment to enjoy the rhythm of the chopping, the sizzle of the butter, the smell of chicken browning in the pan. I soaked up the feeling of my boys gathered at the dinner table, complaining good-naturedly because Kevin put the soccer channel on in Spanish again. I lived in the moment and mmmm. It was better even than the smell of chicken Parm.

But we didn’t! We didn’t go again, because my thoughts took a different turn. Instead of being saddened that the good times will end some day, I was happied* by the thought that I get to have a holiday every day for a very long time. Boom, I was back in the moment, where the boys were now seeing who could eat the most pistachios in a minute and Kevin was asking, “Donde esta la biblioteca?”

Maybe if I can’t stop looking to the future, I can at get better at bringing myself back to the now. Or I can hang onto the happy thoughts about the future and toss the sad ones away instead of latching onto them like it will save me sadness in the future if I go through it all now.

Wait, where am I? What was this post supposed about? What was my point? (This is what happens when I don’t think about the future.)

*If saddened gets to be a verb, then happied should be one too.

Vincenzo has been teaching himself to make popping boba lately, which, he insists, has nothing to do with the sticky refrigerator handle or the sticky stuff all over the cabinet fronts, or the floor that makes a sliiick, sliiick, sliiick sound when we walk on it. It certainly has nothing to do with my good dish towels being smudged with mango-colored fingerprints. They’re so sugar-stiff they stand up on their own when you set them on the counter. Vincenzo is like King Midas, only instead of turning everything into gold, he turns everything sticky.

The other night I spent 45 minutes trying to help him mix xanthan gum into water to thicken it. It kept clumping. I went to the Internet for help, but no matter what we tried (making a slurry, using the blender, pushing it through a sieve, heating the water, adding less, adding more), nothing worked. Then Kevin walked in, looked at the same website I had open, and said to use an immersion blender. It worked.

I balked. “I just spent 45 minutes helping. Dad only helped for like 20 seconds. I even opened the webpage he used! And he gets all the thanks?!”

Then I told him about the time I brought Kevin to dinner at my parents’ shortly after we started dating. I made a blackberry reduction sauce to go with dessert and Kevin helped stir it a teensy tiny bit.  When it was dessert time, Kevin set the sauce on the table with a flourish and announced, “Here’s a blackberry reduction sauce. I made it myself.”

I looked at him, eyes popping. “What? I picked the blackberries! I found the recipe! I measured the ingredients and boiled it down! I only asked you to stir it for ten seconds!” But he continued to take credit for it and bask in the compliments my family was thickly laying on him.

“Watch out,” I said. “Keep this up and I’ll dump you and you’ll never see my family again.”

Then my Dad said, “No; if you dump him, we’ll never see you again.”

It has been a very long 18 years of marriage.

I told this all to Vincenzo, who was by then demonstrating how he thoroughly cleans up his boba messes by wiping the counters with a clean dish towel. I have been trying to break him of this habit for several months. He thinks I’m acting crazy.

“That’s what dish towels are there for!” he asserted.

I explained for the hundredth time that Dobies are for cleaning messes; dish towels for drying clean hands and dishes.

“Okay,” Vincenzo said, but it sounded more like, “Whatever.” He would have given Kevin a “she’s crazy, but we love her anyway” look, except Kevin had disappeared after his heroic 20 second appearance.

“I will now find a NON DISH TOWEL to clean the counters with,” he announced, looking around like maybe there was an TV audience laughing at his mom’s unreasonableness.

“Exactly!” I said. When he went for the Dobie, I sneak-stirred his boba mixture a couple times so I could take credit for the popping boba when it’s finished.

After three days, 27 messes, and lots of nagging about the Tupperwares of yellowish goo in the fridge, I present to you, with a grand flourish…