So Vincenzo got a job because apparently they give 11-year-olds licenses and jobs here in Washington State. Or it could be that I’m losing track of time and actually have a 16-year-old man-child on my hands now.

Any guesses what kind of job King Sticky Fingers got?

That’s right! He’s in the bubble tea biz now, working at Bobae, where they call him Big V. Now instead of making messes at home, he makes them at work and gets paid to clean them up!

He’s gone a lot now, but I see him more. He works 5 to 10 then stops at the grocery store to pick up mac ‘n cheese because no matter what I cook for dinner (unless it’s mac ‘n cheese), that always sounds better. He makes his dinner and we chat, and we actually have things to talk about now that he leaves the house.

For the first time since his flying fighting secret service ninja turtle days, Vincenzo is excited about something. He gets his homework done without nagging, he shaves without being asked. He went to the mall and got shirts with buttons on them, and he wears them even though it’s not Christmas. (Also: Vincenzo knows how to do buttons!) He goes to Bobae on his days off because it’s fun and he loves it there. He brings me boba tea in the middle of a Saturday and says, “Today I brought you a Sapphire Moonlight. It’s our lavender tea that we brew it in house with organic lavender. The blue on top is our pea flower tea. It doesn’t have much of a taste but it is an antioxidant. Be sure to mix well and enjoy!”

It’s changed him in other ways, too. When we went to a restaurant in Hawaii, the first thing he noticed was everyone in the kitchen, toiling away washing dishes and doing all the prep work. “That’s like me!” He opened the menu and his eyes bugged out. “Well I was going to get the steak, but that’s like four hours of work!” At the gelato place, he said, “I’LL TAKE THE NUTELLA AND SALTED CARAMEL PLEASE,” in a clear, confident voice.

Although I was wrong about the kitchen messes. 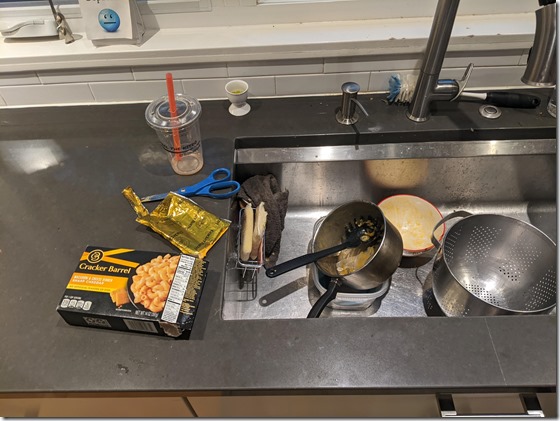 One evening in Hawaii Kevin and I had a talk with Vincenzo about college majors and how some turn into jobs, like computer engineers or accountants. Others you can major in but you can’t really be, like poetry. Then we remembered that one person gets to be the poet laureate each year, so we modified our answer. One poet makes $35,000, plus $5,000 for travel expenses each year.

Later, Kevin and I ducked out to the Big Save for some groceries and I spied an US Weekly magazine headlining JENNIFER ANISTON’S BIG PROBLEM. Below that, it said that Jennifer Aniston:

Being 50 and not having children is not a Big Problem, I said to Kevin. They’re only saying that because she’s female. If it were a 50-year-old male actor without children, he’d be living in a $50 million “palace” and the headline would read HOLLYWOOD’S MOST ELIGIBLE BACHELOR! They’d probably give him some kind of trophy. They’d probably name a constellation after him!

“Right?” I asked.
“Right,” Kevin said. “But we should be focusing on the bigger problem here.”
Me: What’s that?
Kevin: Jennifer Aniston’s big problem. I really want to see her get help.

Some days I think Kevin is a saint. Some days it’s me who’s the saint.

In the car, I searched up a bit more.

A few minutes later, we set the groceries on the table, where Vincenzo was finishing up a box of pizza.

Vincenzo: What’s up with Mom?
Kevin: Apparently she doesn’t like the word “spinster.”
Me: It’s true! I don’t! There’s no male equivalent of the word “spinster!”
Kevin: I just looked it up. There is an opposite.
Me: What is it?
Kevin: Bachelor.
Me: That is so not equivalent. You never hear of HOLLYWOOD’S MOST ELIGIBLE SPINSTER, do you?
Vincenzo: Maybe the word you want is waifu.
Me: Waifu? Am I saying that right? What’s a waifu?
Vincenzo: You know, when you’re simp for someone, if I remember my anime.
Me: What’s a simp?
Vincenzo:  To fawn over someone.
Me: Fawn over someone? What are you, like 70?
Vincenzo: No, I think I’m a poet! I’ll take that $35,000 now!

So you already know my answer to the question, “How did you spend spring break?” Leo’s fourth grade teacher asked the class to write about theirs, and he took a different spin on the whole thing. Here’s his essay:

Over my spring break I went to Hawii. First, me and my familly started doing last minute packing. Suddenly, we were driving to the airport. Then we were at the airport. I think: “What if something happens and we don’t make it to Hawii” before I realize it, I’m on the plane. It’s a little bumpy, but we make it to the next flight even though there was a slight delay. This is a very bumpy flight, but we make it to the VERY hot Hawii. Then we check into the hottel. Then we spend the rest of the day at the pool

All in all, it was a fun spring Break. If you want more content, please suscribe. We interupt this message do to an Alien Invasion.

I don’t think his teacher had any idea what to even do with it.

But then, she doesn’t have a blog.

Hawaii was so vibrant and vivid, so familiar and yet completely different that it felt like we were on another planet—one even more beautiful than Earth. 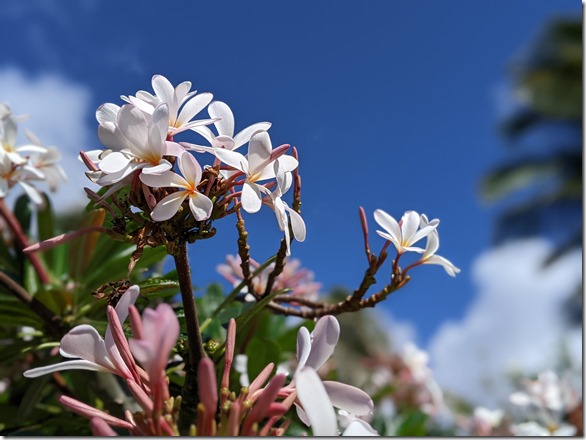 Was this planet here the whole time? 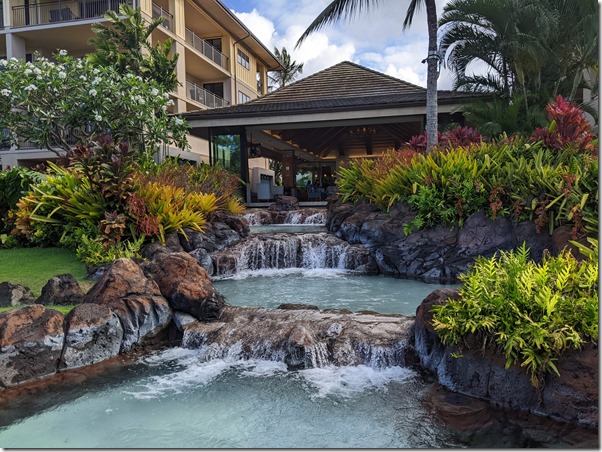 If so, why are we still living on Earth when we could be living here?!

The above pictures are from our first hotel. It was hard to leave such a paradise for our condo in Lihue. But then we got to the condo.

Well, that’s not so terrible. Plus, it came with this beach: 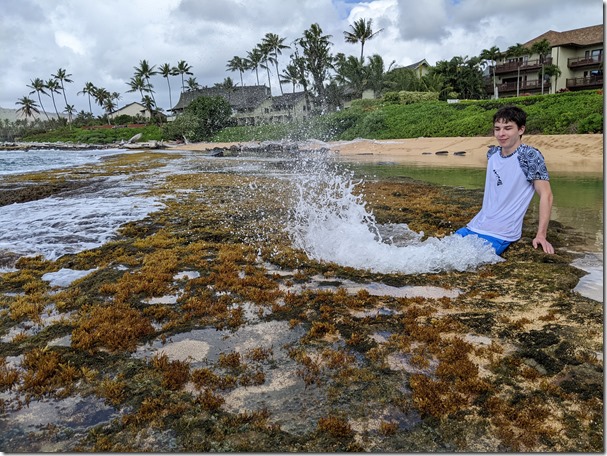 We did manage to pull ourselves away from the condo a few times to explore the Planet Hawaii, like Waimea canyon. We took a little detour to Mars on the way up there:

We found water on Mars! 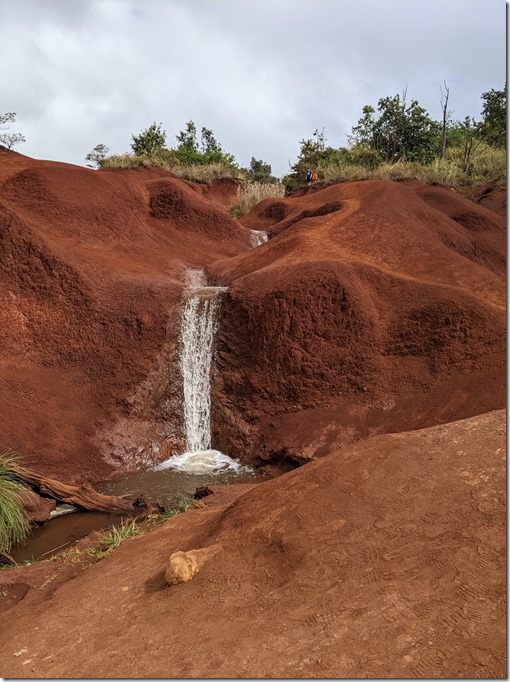 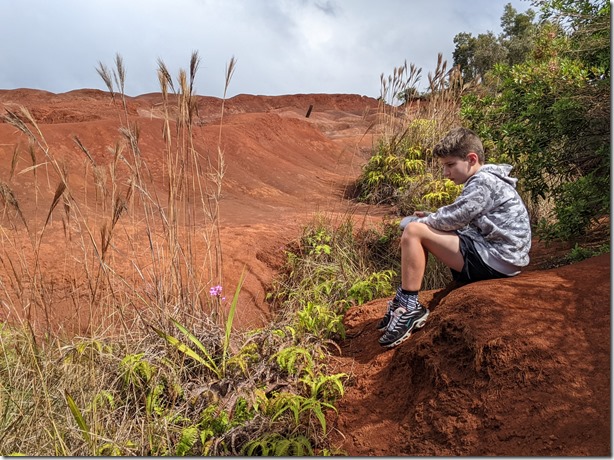 Then we pulled over to a lodge where we both ate chicken and fed the chickens. (The doves thought we were there for them.) 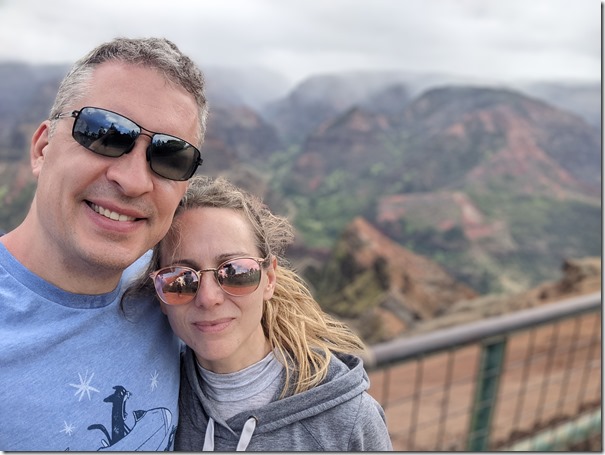 Al that was just one day! I better speed things up before we get to TLDR. Here are cliff notes for the rest of the week:

We did some snorkeling:

And some boogie boarding:

Leo did some peeping:

We saw a couple waterfalls (notice I’m moving down the line-up in my family): 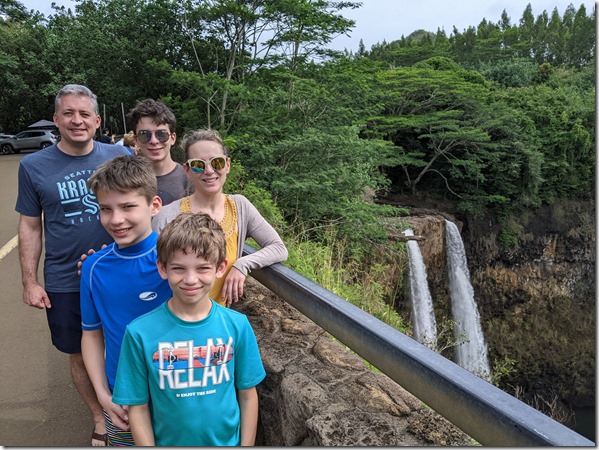 Maybe too many fruity drinks?: 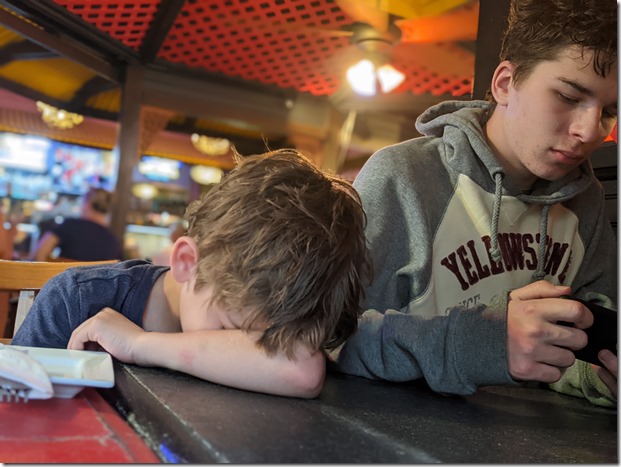 We went to a luau: 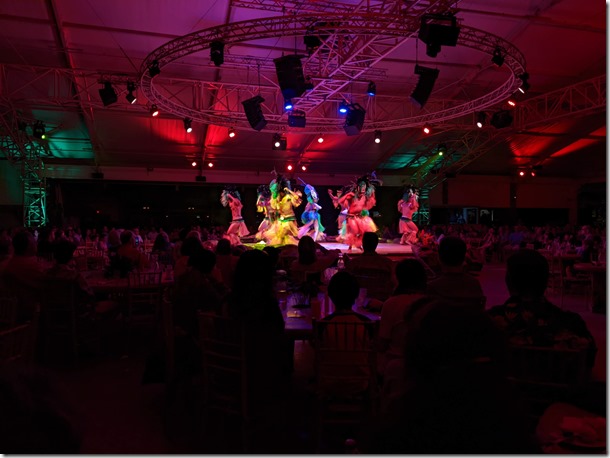 Inner-tubed down the irrigation canals of an old sugar plantation… 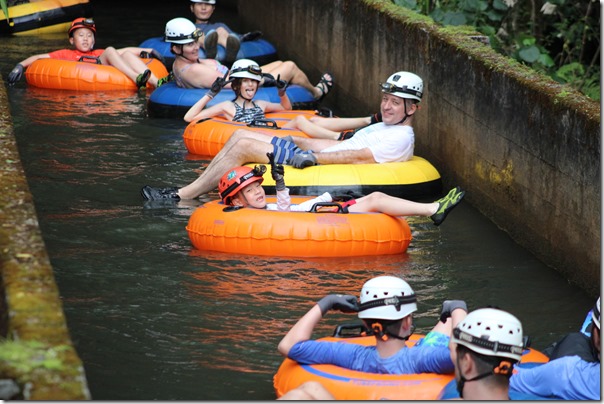 …and tried not to take pictures of all the grocery store signs (though each was as wondrous as this):

These pictures make it look like we did a lot, but it felt like the opposite. It felt like we did nothing but take it all in—the beaches, the sky, the chickens, all the kinds of juices. It was hard to say goodbye. 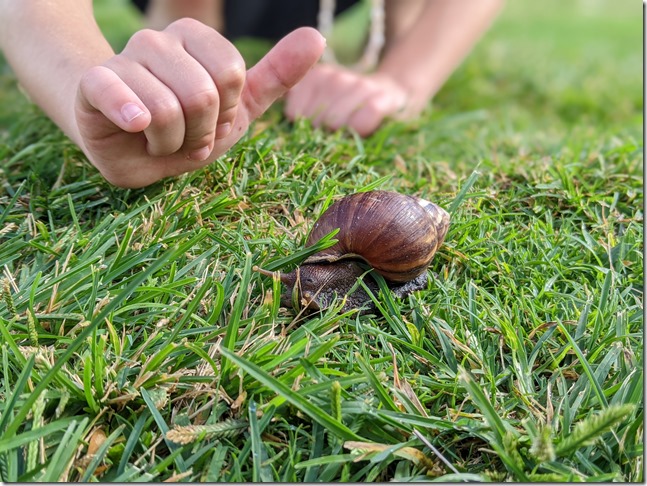 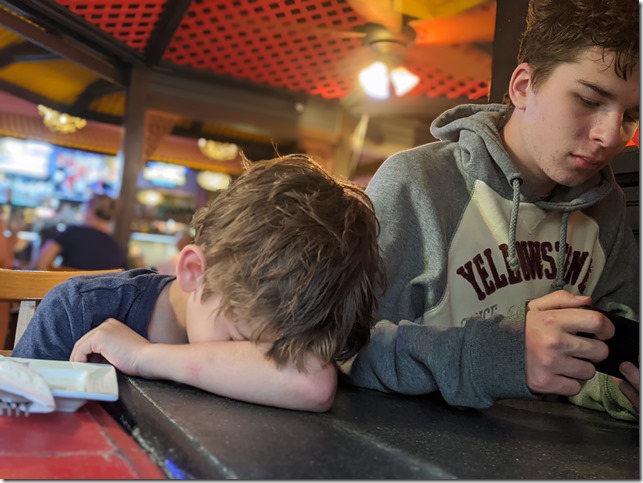 Hawaii was a dream I didn’t want to wake up from. A perfect week, except that by the end of the it, my hair had turned into wet rope and everything was sticking to my skin. I was ready to go home.

I was ready to go home, but I’m not ready to be home, where I have Mostly Impossible Expectations of Myself. I miss the Hawaiian Me.

But at least I know where to find her.

I always tell the boys they can’t say “everything” when I ask what their favorite part of a trip was. I tell them it’s the same as saying “nothing.” But here I am, newly returned from Hawaii, and if you ask me what my favorite part was, I’d say, “Everything.” Every moment. Every memory. They were all my favorite.

Up until the trip, I kept saying we shouldn’t count our chickens until they hatched, with all the things that could go wrong: airline strikes, fuel prices, the threat of nuclear war, a sore throat. It wasn’t until the plane’s wheels left the runway that I told the boys, “Okay, it’s time. We can count our chickens!”

Coincidentally, the first thing we saw when we left the airport in Kauai was a rooster, standing on the side of the freeway. We laughed about the absurdity it. A rooster! Just hanging out in Hawaii!

Chickens, too, and baby chicks. Dozens upon dozens of them.

Apparently some domestic chickens got set loose by hurricanes in the 80s and 90s, mated with wild red jungle fowl, and boom! 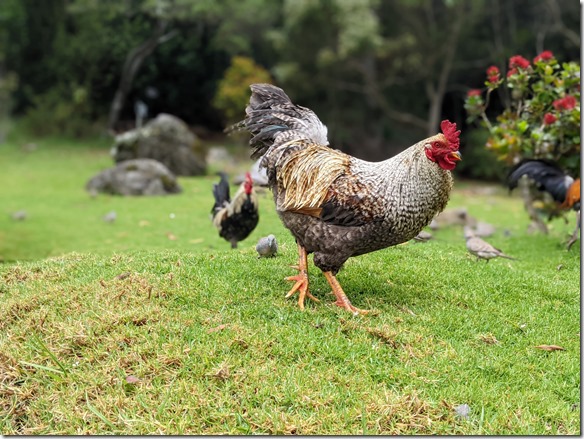 (Whoops—the last one is not a rooster. It is Rocco’s hair, after a week of saltwater, sunblock, and forgotten showers.)

I had planned an April Fool’s joke not knowing about the island’s feral chickens, but that only made it better. I made square hard-boiled eggs with molds I brought from home, and I told the boys that the reason there are so many chickens here is because they lay square eggs that don’t roll away. 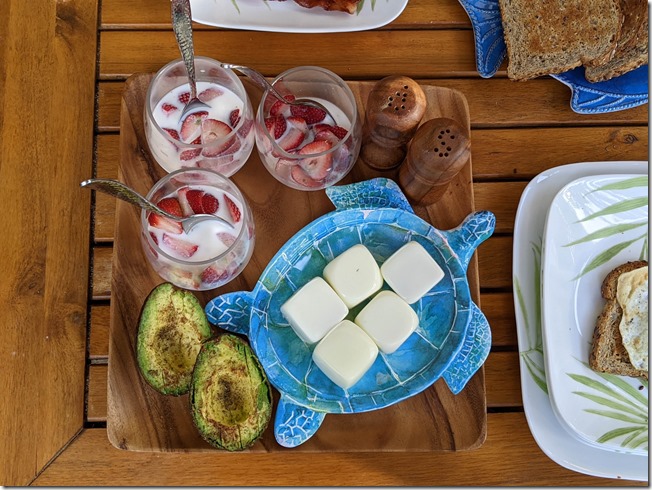 They didn’t buy it.

Leo, at least, was open to the idea, but Rocco remembered that I used to make those when he was, like two years old, and Rocco is not the type to forget anything ever. Well, except he did forget one thing, which I’m getting to.

I made the eggs on April 3rd, as we were in a hotel on the 1st, but I explained that in Hawaii they celebrate April Fool’s Day on the third because of island time. That one they bought.

Then on April 6th, I told the boys to wish me happy birthday.  “April Fool’s!” they said, totally onto me. I continued to insist it was my birthday, much in the same manner I continued to insist Hawaii’s chickens lay square eggs. It wasn’t until they saw me type my birthday into the kiosk at the airport that they realized I wasn’t joking. The look of surprise and guilt on their faces was absolutely worth the forgetting.

We spent the entirety of my birthday at airports and on airplanes, losing three hours of it to time zones and coming home with only enough time to brush our teeth before forgetting it was my birthday one last time. It wasn’t much of a birthday, but as I had just spent a week counting my chickens in Hawaii (hundreds of them. Thousands of them!), I was in no position to complain. 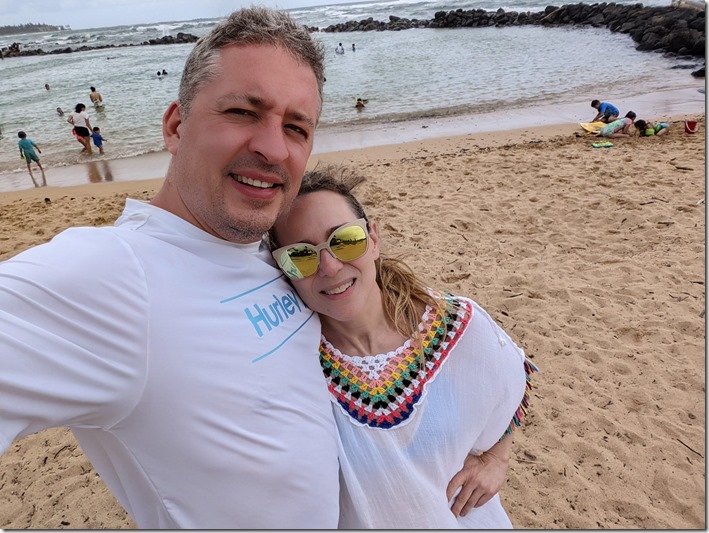