I’m not too late to blog about it, am I?  After a whirlwind week of family, museums, and plane trips, I feel like I’m taking that first huge breath after having been brought back to life.  So here it is, the big T-Day ‘017, in three parts: beginning, during, and after.  I do my best attempt to recreate some moments you probably had to be there to really get, so my apologies if you read this post and just think, “???”

We had Thanksgiving at my husband’s sister’s mother’s house, or my MIL’s sister’s house, or my sons’ father’s mother’s nieces’ parents’ house–whichever is easier for you to understand.  The minute we got there, Kevin’s cousin Ginny hooked me and Kevin up to Kleenex boxes for a game of “shake your tail feathers” where we were supposed to jump around to get the feathers out.  No pictures, but I drew a representation:

(Representation may not be accurate to how events actually played out.)

Ginny started worrying about the size of the Kleenex box hole being too small, to which I announced loudly in front of everyone and Kevin’s mother, “Kevin’s always telling me that size doesn’t matter."  After gyrating and jumping for a few minutes with nary a feather falling out, we decided we would instead grab the feathers out of each other’s boxes, which made Kevin ask, “Can I tie mine in front?”

Like I said, you probably had to be there.  But it’s a good thing the kids were in the basement for all of this.

We had some amazing chefs working in the kitchen while all this was going on.

Wait, what does her apron say? 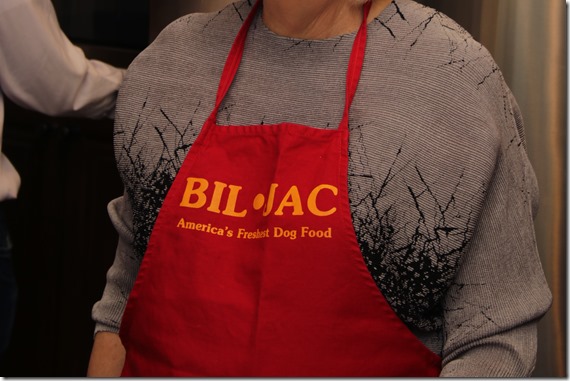 Oh well, Kevin’s mom can make anything taste good.  And as you can see, Thanksgiving dinner was doggone delicious.

I kid, I kid.  Wonderful people food was made as well and eaten by humans who all went back for seconds.

My favorite part of dinner was this conversation I had with Zoey, age 8ish:

At which point Kevin hijacked the conversation and then it really went off the rails, but Kevin’s not the star of this blog so we’ll just forget about that.

After dinner, we all went downstairs to view the Ashley Whippet Frisbee Dog Museum, which happens to be in the family’s basement, and if you think that means it isn’t a full-blown museum, then you have another think coming.  There was nothing basement-y about this museum at all!  Hundreds of Frisbees, signed things, trophies, medals, memorabilia, even ashes of Frisbee dogs of the past, plus doors that looked incredibly official. 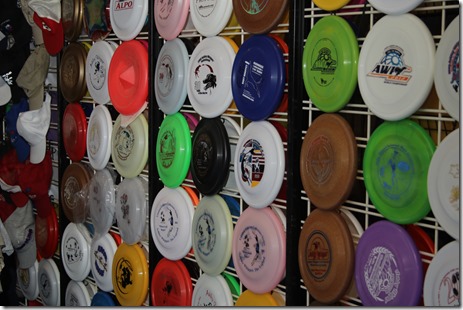 After we had gotten our fill of turkey an Frisbees, we spent the rest of the evening mercilessly beating the 88-year-old “GG” (Great Grandma) in round after round of a fast card game called “spit.”  She laughed as hard as the rest of us at herself.

And all that was just one of three wild and crazy days in Chi-town.  We’ll see if I get around to posting the other two, but I’ve been a-writin’ books lately and don’t have much time left over for blog writing!

I texted Vincenzo the other day that he left his lunch in the fridge at home.  He texted back not to worry because he was having a big bowl of FU for lunch.  A big bowl of F.U.?  I thought that was a pretty metal response for a quiet, skinny middle schooler, and I could feel my respect for him bump up a notch.

But then when he got home from school I had him describe his lunch to me, and his description looked like this: 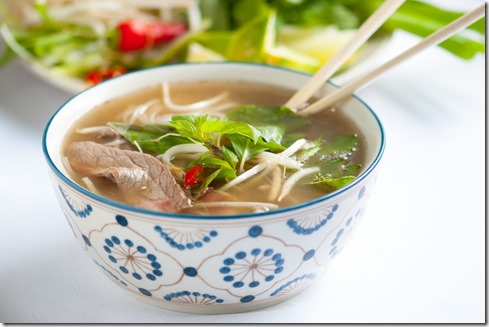 Not very metal after all.

I was talking to Vincenzo and his friend about A Modest Proposal (you know, that essay about how we can solve both overpopulation and starvation by eating children) and they got the point of it quite quickly.

Alex, imagining the future: Mmm, something smells delicious.
Me: It’s Vincenzo!
Alex:  Are you sure he’s safe to eat?
Me: It’s okay, I washed his hands before dinner.
Alex: Oh look, Vincenzo’s already at the table.  Or—er—on the table!
Me:  Yes, and this is his little sister, Breakfast, his brother, Thanksgiving Dinner, and “Light Snack,” the baby!

It was frightening how easily that conversation came to all of us.

So I got my first ever call home from the principal a couple weeks ago.  It was on anti-bullying day, when all the kids had worn orange in support of non bully types, and that day the principal called and said something like this:

Leo’s teacher called with a different message about the incident that had only a little bit of overlap and made the whole thing seem like  a gigantic, real-life game of operator where on one end someone says, “Leo got kicked in the beans,” and on the other end it comes out as, “I like your new jeans.”

It’s actually kind of a sweet and sad story that I pulled out of the boys that afternoon.  Apparently there’s this group of kindergarten boys that had been chasing Rocco at recesses for a week, even though he told them he didn’t want to play chase.  He had tried ignoring them, walking away, and telling a playground teacher, but the boys still chased him and then would tackle him and rough him up a bit.  In a kindergarten kind of way.

So on anti-bullying day, like all the other days, that gang of kindergarteners  chased Rocco and tackled him and was crawling all over him.  But then, out of the dust and smoke, a hero rose and came to Rocco’s rescue.  It was his little brother, Leo.

“Get off my brudder!” he told the gang.  “He doesn’t like that!”  The boys ignored him, so Leo tried pulling one of them off and that’s when he got kicked.  Right in the orange shorts.

I know I should be feeling Mama Bear about this whole thing and I am a little, but mostly I am just touched by the whole brother-sticking-up-for-brother thing, especially because it was little Leo standing up for his bigger brother.  It gets me right in the feels, you know?  My boys have a love-hate-hate relationship at home and I’ve always assumed that if one of them saw the other getting it, they might just casually walk off in the other direction, or even join in.  I am so moved by Leo’s act of bravery on his brother’s behalf.

So that’s where we’re at.  Phone calls were made and the chasing stopped, though I’m told that yesterday it started up again.  This time, Rocco is prepared though—he and his friends have a plan that involves flanking, distraction, and a very fast sprint to the playground teachers.

I know it’s been a bit rough for Rocco, but I also look at everything that’s happening at recess and think how he is learning some of his biggest lessons in school out there.  Lessons about loyalty, bravery, self-advocacy, and brotherhood.  And if all this chasing doesn’t settle down soon, he’s going to get to see a Mama Bear in action.

I will be swift and merciful and I will make sure to wear the least bright pair of shorts I have. 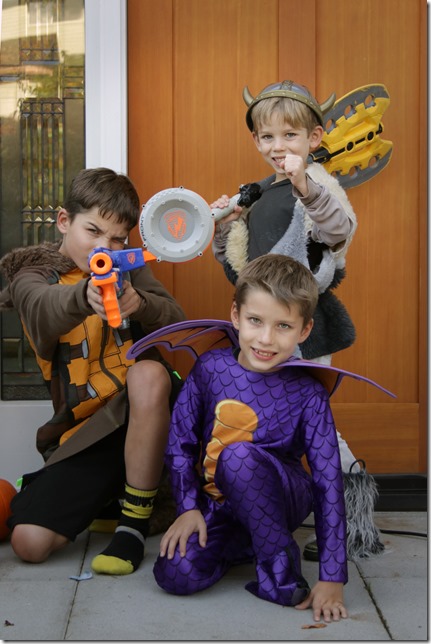 Some kind of a…raccoon, I want to say?  From Guardians of the Galaxy?

And a “wiking,” i.e. a viking with a speech impediment.

I shouldn’t love Halloween as much as I do, with all its sugary craziness, but I do.  I love how Rocco’s mission in trick-or-treating was to collect all his aunt’s favorites, since she was standing back on the curb.  I love that when Rocco fell down and spilled all his candy, as he does every year, all the sixth graders got down on their hands and knees to pick it up for him.  I love that Vincenzo held little Cal’s hand for most of the time, even if it meant he missed a few houses.  I love that Leo, my sugar addict, wanted to quit early and just head home.  I love that afterwards, everyone set up their candy shops in the house and each boy felt they were getting the best deal in the trading.  There were some very strange economics happening there.

Christmas is fun and all, but if I had to pick I think I might choose Halloween.