Leo, my happy spaz of a kid, has danced way into his ninth year, his skinny arms flailing about like one of those blowy things at a car dealership. 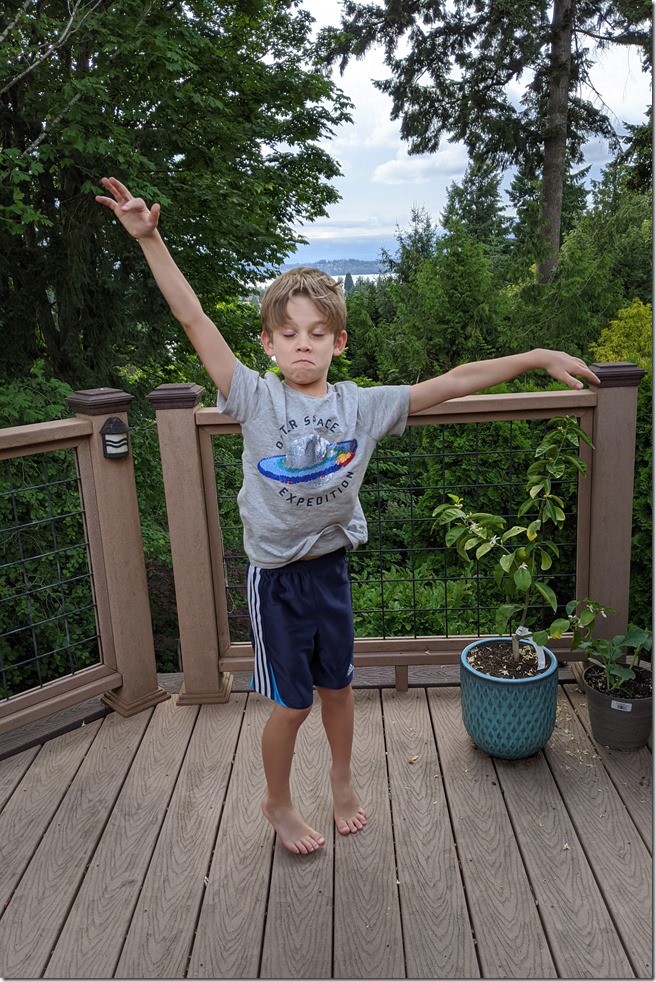 While most of the pictures in this post don’t match up with the text, they all match up with Leo, Age Nine, in all his nonsensical glory. 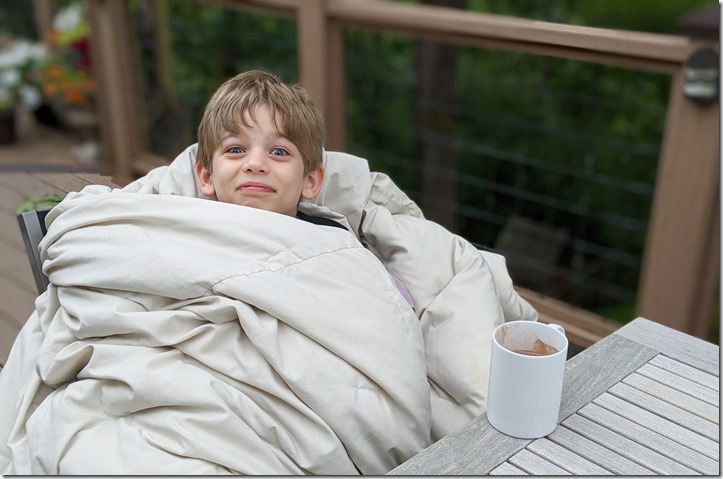 Leo is happy 95% of the time, but so very, very mad that other 5%, as demonstrated by this singular moment. 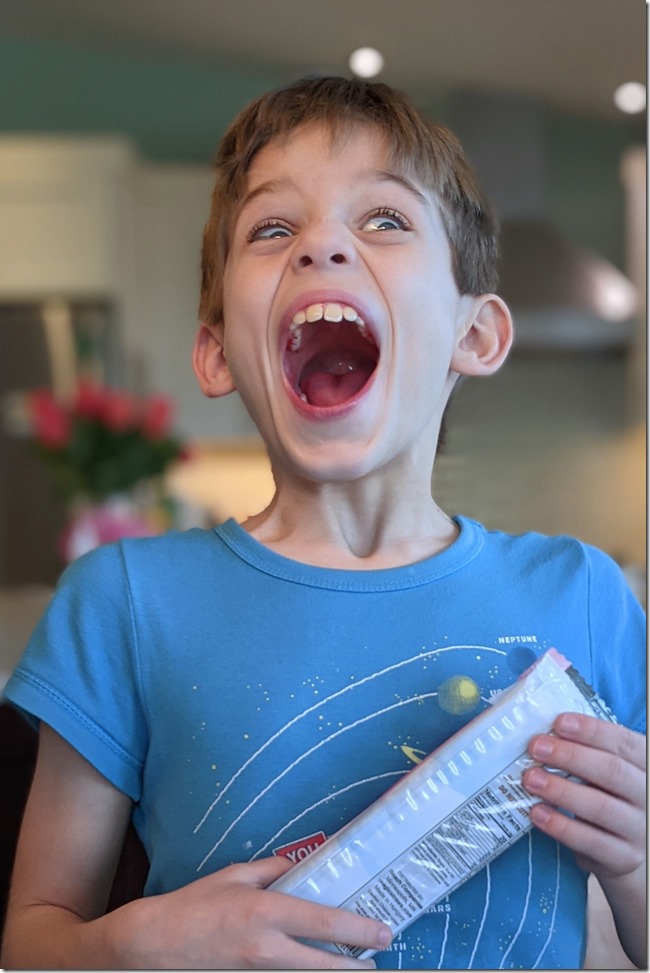 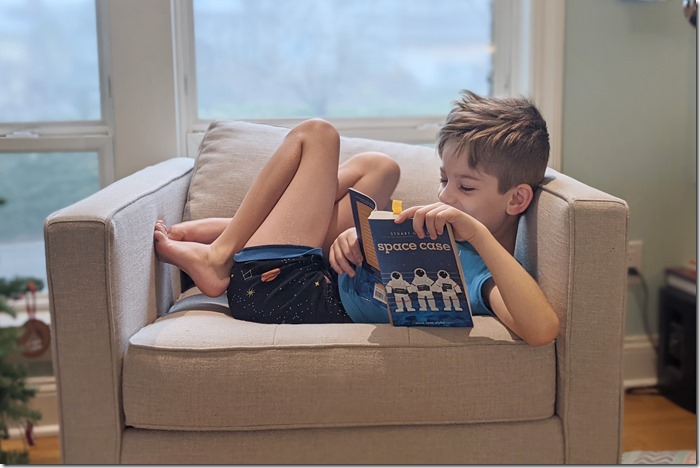 He liked riding his bike for about two weeks, until Rocco also decided he liked riding bikes and now Leo doesn’t like it anymore.

He loves attacking Kevin, even though his fists bounce off Kevin’s chest like tiny drumsticks off a big drum. And even though Kevin pile drives him onto the couch and pins him to the ground, every fight ends with Leo dancing around the living room, declaring himself the winner. 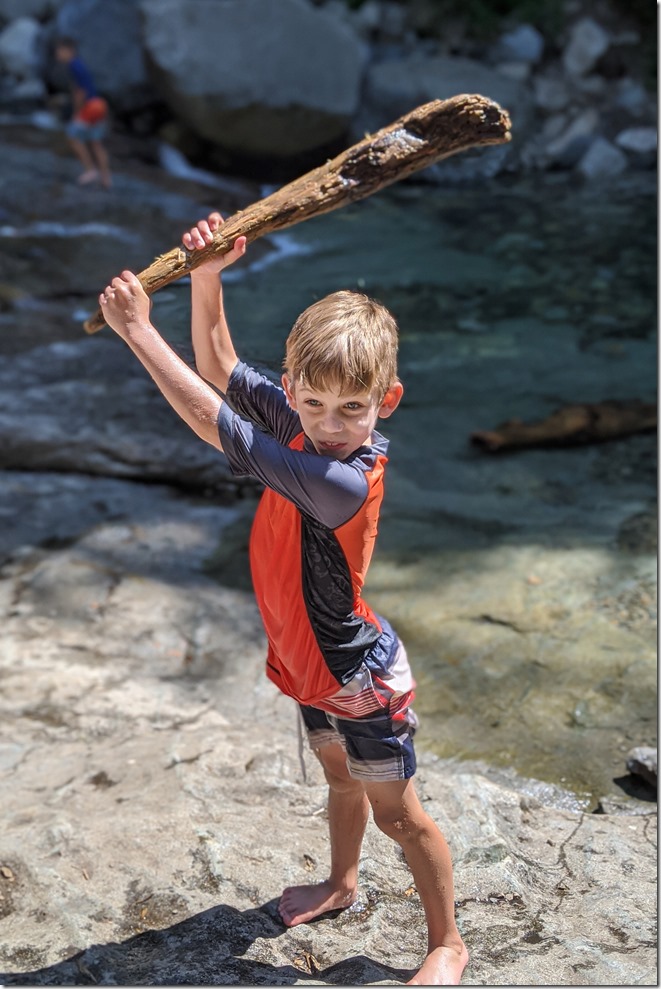 His favorite Avenger is Loki, no matter how many times we explain he’s a villain. He and Rocco were very concerned about Loki when he got arrested at the end of Thor, thus securing a place in their empathetic hearts.

Leo and Rocco get along much better than they used to, though at least twice a day they get into it over something dumb, like someone saying something in the wrong voice or standing too close to the pinball machine. 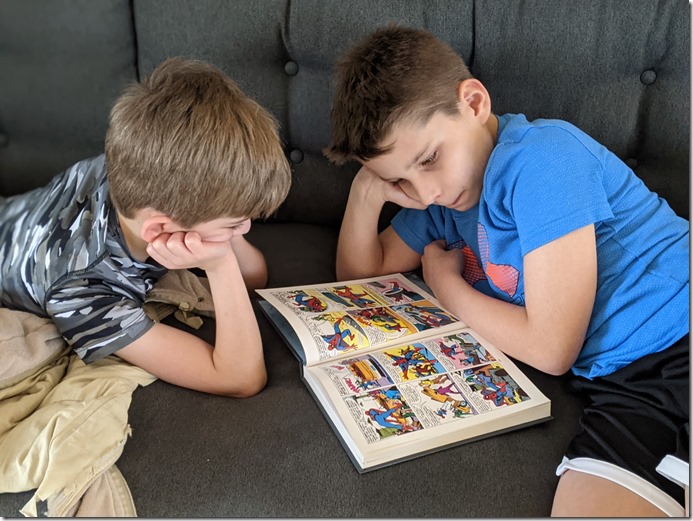 But it’s nothing a little Loki time can’t smooth over.

Leo’s the random number generator of our family. He might come out of his room with a mini claw-grabber that he uses to pick things up with the rest of the day. I might go downstairs to see him wearing a beard and bandana, or reading a book upside-down on the couch. I may look down the hallway to see him squished up against the wall, claiming he’s not there. Me: “How long have you been standing there like that?” Him: “No one is standing here.” 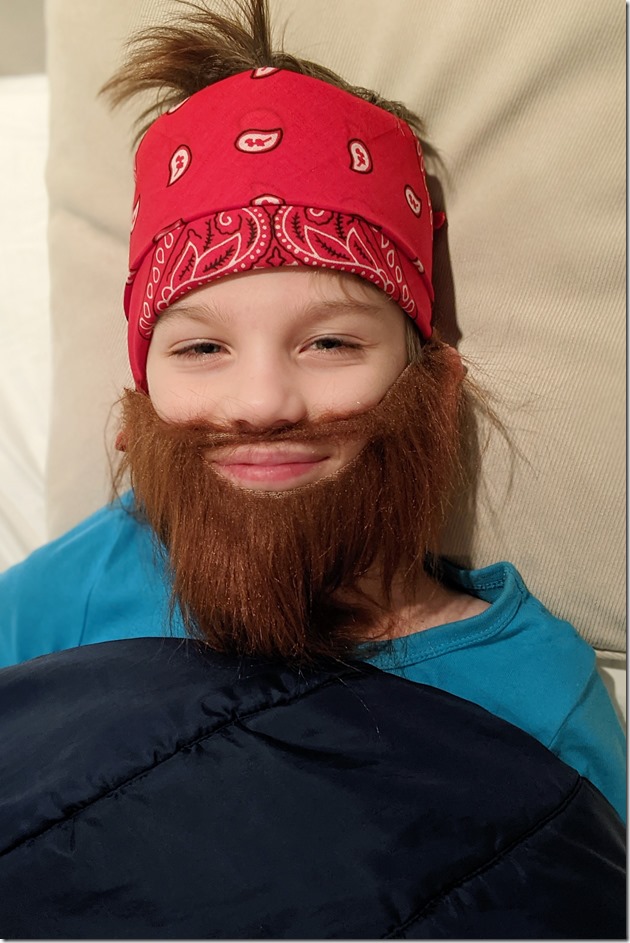 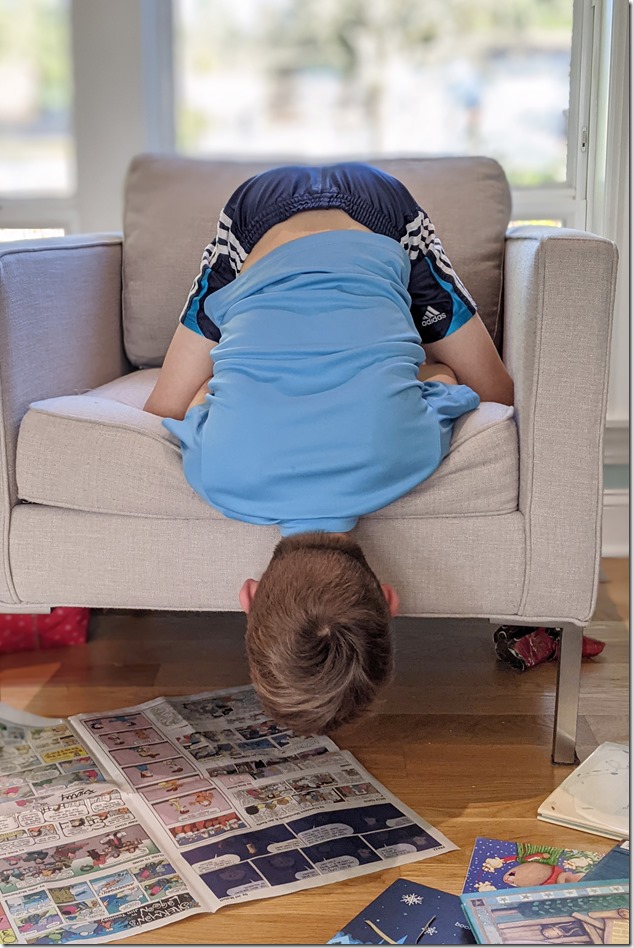 Leo is generous, sharing his favorite candy, his unicorn chair, and especially his art supplies with anyone who asks . Keep them! Keep all the art supplies!

(Does this count as art?)

There’s something about Leo’s brain and body that doesn’t do things fast, which is why he’s needed so much speech therapy and OT, and also why he has an absolute meltdown when he feels rushed. While the therapy has helped fix some of his issues, it hasn’t changed Leo’s best quirks, like the hair twirling he’s done since he was a baby.

And whatever you call this.

He loves a good prank and any kind of pun. He makes up a lot of jokes on his own, most of which are bad but some of which are funny.

Leo: What’s a sharp-clawed crow’s favorite room of the house?
Me: I don’t know, what?
Leo: The claw-set.

(I can’t tell which category that one falls into.) 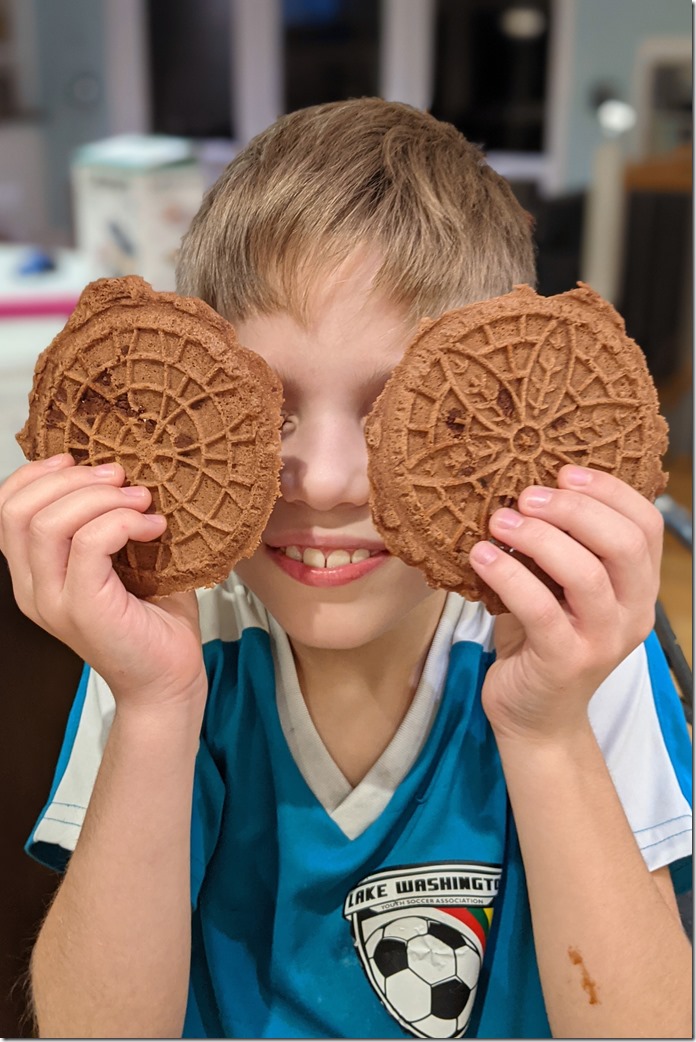 He is a boy of big feels. A couple months ago Leo pretend-shot Kevin, who said it missed and got me instead, and I pretended to die on the kitchen floor. As I lay there, pretend-dead, Leo ran over and fervently told me the bullet didn’t hit me, I’m still alive. That night, after the boys had been in bed for an hour, he came stumbling out of his room, crying, and asked me to never do that thing I did in the kitchen again. Oh, his heart.

He’s still my baby, even though he’s too gangly and sharp-elbowed to even fake it anymore. He’s a gentle, loving soul who is half silly, half, sweet, and 100% ridiculous. He believes in Santa Claus and the Easter Bunny and leprechauns. Believes in it all, whole-heartedly.

And what a lot of heart he has. 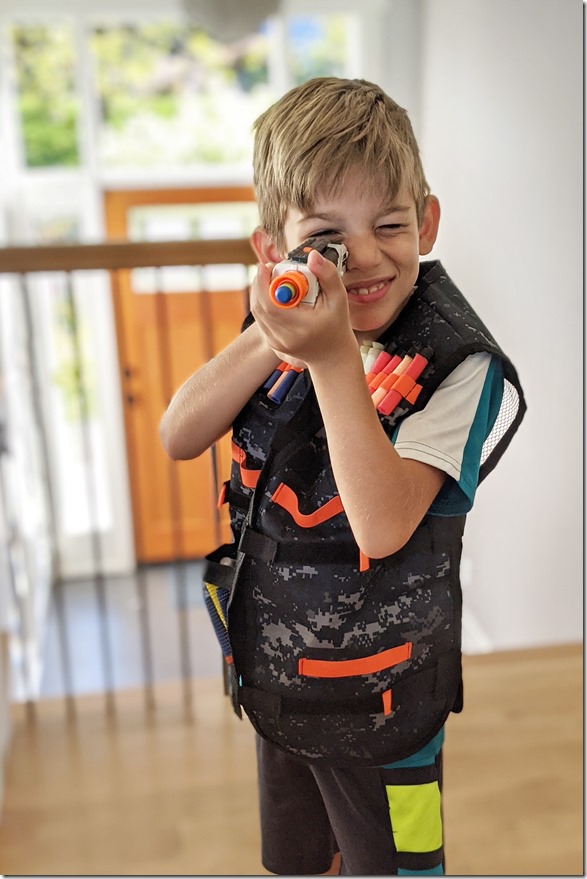 Well, surely we can do better than that picture to bring us to a sentimental end.

Take II: And what a lot of heart he has.

Take III: And what a lot of…turkey he has?

Gah! This is hard! Gimme a sec to find some kind of a picture that feels right.

Take IV: And what a lot of heart he has.

I’m still a bit on the outs with words and am showing up timidly today, approaching this blog post carefully, touching it with a stick, ready to jump back if it seems dangerous.

Leo turned 9 last week and we celebrated with a remote birthday party, which meant I got to be crafty!

We dropped the boxes off the morning of his party, which was half the fun, as it involved parts of the world that exist outside of our house.

That evening, the boys met up on Zoom where they did some minute-to-win-it games, like emptying out a box of Kleenex and trying to get an Oreo from their foreheads to their mouths without using hands. Hilarity (and big messes) ensued.

Then the boys microwaved popcorn and watched a cartoon together, decorated party hats, made some noise for the birthday boy with confetti poppers and blowers, and played video games until their eyeballs turned into raisins.

I don’t have a neat, conclusive way to end this blog post, so I’ll just throw a picture onto it and hope you don’t notice the abrupt ending. 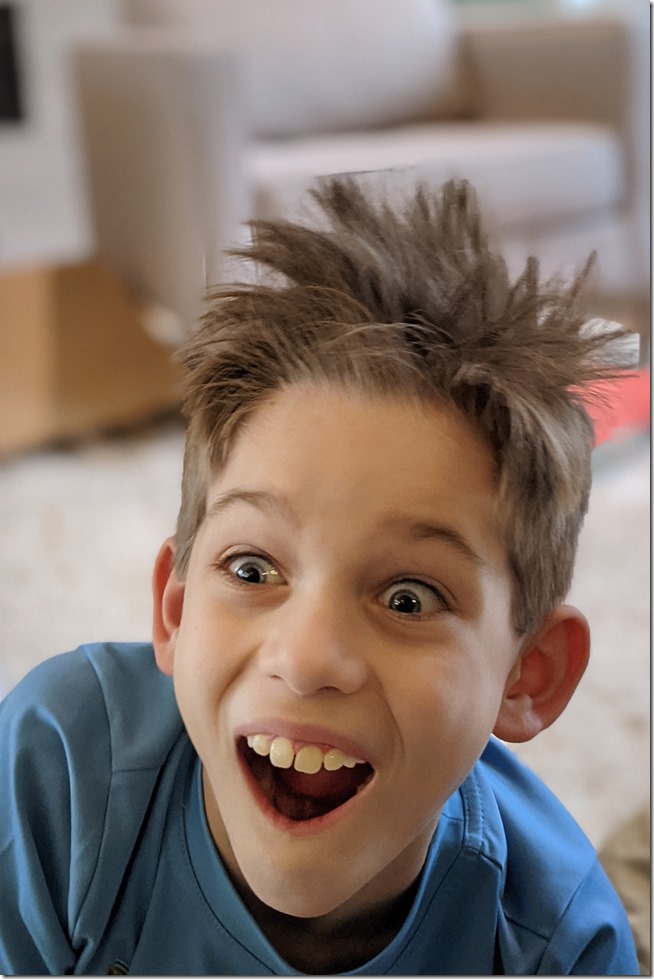 Hey guys, it’s me. Just going through some rough stuff as a writer, and for the first time in my life, I need a little break from words. Instead, here is a picture of the three things that I love even more than words. 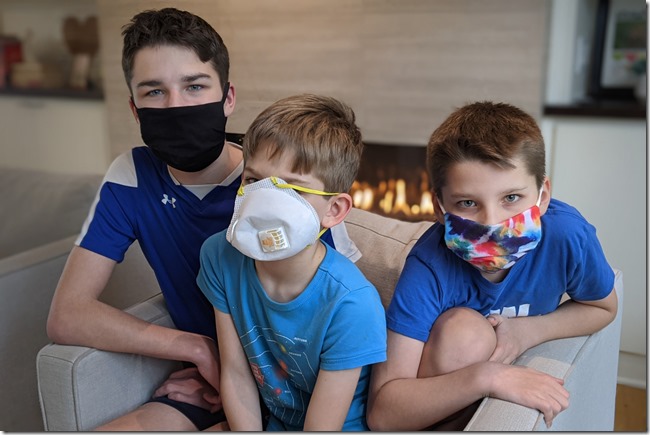