My pregnant friend let me take pictures of her and her gorgeous family last night and you, lucky you, get the opportunity now to LOOK at them.  Yippee!  I feel badly she got me instead of a real photographer because a lot of these pictures are almost great, but just a little too blurry to be perfect, or with a tree growing out of someone’s head.  Plus, the only thing my photo editing software can do is turn pictures to black and white.  But as Vincenzo taught me, “You get what you get and you don’t pitch a fit.”  My favorite part of the evening was when their darling daughter pulled down her pants and went potty in the yard, then spent the rest of the night wearing only a shirt.  ONLY a shirt.  It felt so much like home. 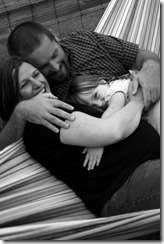 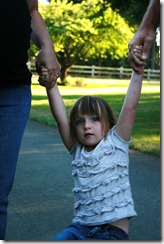 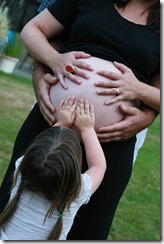 For the lack of absolutely anything to blog about, and because I promised it a couple weeks ago, here are a few more pictures from Rocco’s Crazy Hair birthday party.

I don’t know which was cooler—the birds in auntie and uncle’s hair or the skull-and-roses dresses auntie was wearing.

The newlyweds.  Marriage has changed them already, see? 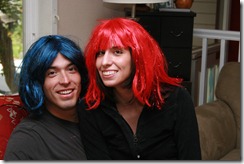 Rocco’s grandpa.  We’re not sure if he’s Japanese or Chinese, so we’ll just go with Asian.

We don’t know who this guy is—he just showed up, ate all the Late Night All Night Cheeseburger Doritos and left.

My head still hurts from this hair-do.

There’s a party pooper in every crowd, and Rocco’s party was no exception.  Ya think Leo could have manned up and grown a little something for his friend’s one-and-only first birthday? 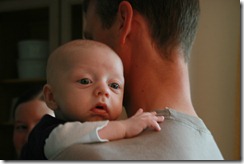 But awwwwwwww he’s so cute.

Now let’s everyone hope that my kids do something in the next 24 hours that shows how cleverly idiotic they are and showcases my well-intentioned yet often clumsy and misguided parenting so that I can write about it in a self-deprecating, uproarious way, or I’m going to be forced about the time my baby ate his own poop.

I showed up early to Vincenzo’s sports camp today so I could watch him play.  When I walked onto the field I saw him finish a game of soccer, then go over to a tree and start kicking it.  As soon as he saw me, he burst into tears.  “What’s wrong, honey?”  “Mooommm,” he sobbed, “I lost the World Cup!”

Poor guy.  He’s so darn competitive we won’t play board games with him because he explodes into raging tears if he so much as draws the wrong color of card in a game of Uno.  I can’t even describe what happens when he actually loses a game.  We keep the games hidden away.  Every once in awhile he remembers them and asks, “Hey Mom, wanna play a game of Candyland?”

I know exactly how pigs feel as they’re being led away to the slaugherhouse.

Sports camp ended today with a game of rainbow tag, where you freeze if you’re tagged.  Vincenzo handled it very well when he got tagged.  I was impressed!  (Of course, it’s not exactly the World Cup…)  But then Vincenzo noticed other kids getting tagged and not freezing, and he stood there, frozen, yelling at them with all his might and turning redder and redder and madder and madder, rooted to his place the entire time because while there was nothing in the rules about micromanaging other players, there was a very strict rule about not moving once you’re tagged.  My kid.  The Dwight Schrute of rainbow tag.  Another fit of tears followed by another round of hugs and sports camp ended for the summer.

I wish I could help him.  I know enough to avoid signing him up for competitive sports.  When he races me to the car or up the stairs I just tell him I’m not competing.  When we do play board games I model being a good sport and being a poor sport so he can see the difference.  We stress having fun over winning, we celebrate mistakes, we stopped beating him when he came in second place.  And still.

Anyway maybe he’ll just grow out of it.  It looks like the competition did, being two years older and ten pounds heavier than him… 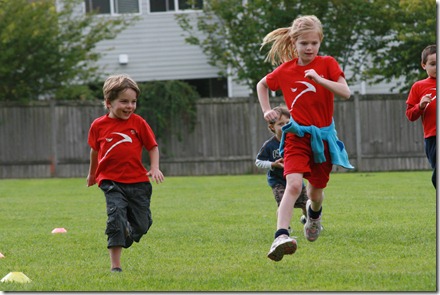 even if it was just a GIRL.

I still feel like you don’t quite understand what the town we visited this weekend was like.  Let me try again.

For those of you on the west coast, think Las Vegas only replace the casinos with arcades and people standing on the corner passing out cards with whores on them with a guy who stands on a corner passing out free taffy and singing a creepy song about visiting his taffy store.  Also, replace the Cirque du Soleil with an annual rock and gem show.

For those of you on the east coast, think Jersey Shore only replace Snookie with me in a fat suit.

Which explains why I seriously can’t wait for our vacation weekend to roll around each summer, and why it never disappoints.

Just in case any of you are tired of me making fun of my little Guidos and want to see some pretty pictures from our weekend, here you are. 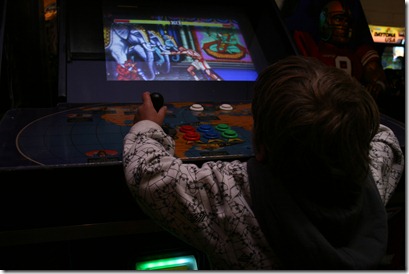 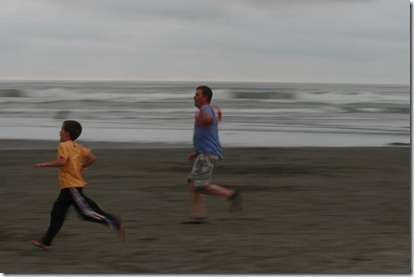 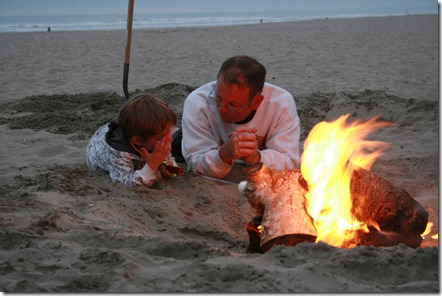 This weekend was our annual trip to the beach, to a city that boasts “170 kinds of saltwater taffy.”  Now that Vincenzo has been there, it could also boast “170 ways to have a meltdown.”  Seriously.  We’d be all, “Hey Vincenzo, wanna go to the arcade and then get some ice cream?” and he’d hit the floor like he was shot and roll all around the hotel room, screaming that he didn’t want to he didn’t want to HE DIDN’T WA-HA-HAAAAAAAANT TO!"  So we’d tell him okay, we won’t, and then there would be an even bigger meltdown that usually ended with him throwing the queen size bed off the balcony then setting his own hair on fire.

When he wasn’t melting down he spent a lot of time ordering us around, demanding things, and threatening to hit small children with his shovel.  We’re beginning to think that Hitler’s parents were just a nice, fun-loving, liberal couple with a good sense of humor who took little Hitler to quaint seaside towns on the weekends.

As for Rocco, our calm, good-natured baby has been crying for a week straight and just went right on with that through our family vacation.  I took him to the doctor last week and this week I think I’ll take him to the priest.

Anyway, we managed to have a good time despite it all.

Here Vincenzo appears to be tasting the wind until you look a little closer and notice he’s about to taste something a bit more…flavorful.

We took the kids on the Carousel of Death.  It starts innocently enough… 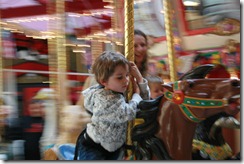 and then when you get off your arms do this. 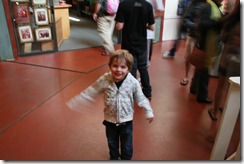 We really outdid ourselves and took Rocco out of the stroller this weekend.  Here’s how it went for him: 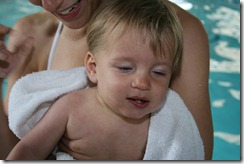 (This last one isn’t so much a picture as a sound.  “EEERRRRRHHHHH!”)

So we put him back in the stroller.

See if you can spot Poppy in this picture—it might be hard because he’s wearing a camouflage hat. 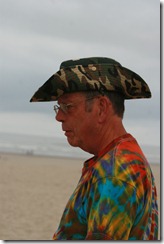 You know how they say that the bubbly foam that sits on top of hot tub water comes from the oils and grime off of all the bodies that have been in there?  We’d like to thank the big hairy guy and his equally hairy wife who visited the spa earlier in the day for the following pictures:

Vincenzo, any final thoughts on our vacation? 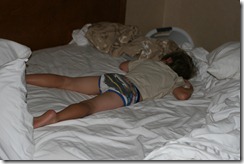 One of the moms I met this year who I will heretofore refer to as Vetty is just like me in that she has a gigantic list of things she wants to do and she wants to do them NOW and she will not be able to sleep until she gets them done.  We want to take the kids to a waterfall, go hiking in the mountains, sign up for that dam tour, take the boys kayaking, take ferry rides to nowhere, hit up every zoo and museum we can find, get the kids drunk and take them bungee jumping.  (Just checking if you’re still reading.  You are.)

Vetty’s weakness is that she can’t seem to make time in her schedule for all her ideas.  My weakness is that even with a printed out map, hand-written directions, and a cell phone most of my attempts to find new places end on the side of the road with me placing a sobbing, panicky phone call to my husband, who then has a heck of a time trying to figure out how to tell me how to get back home.

Except Monday and Friday, because we’re busy.

Oh, and except—did you see the weather forecast? 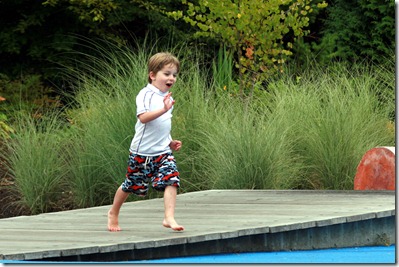 And ended it at the farm/amusement park we go to all year long.

You can tell from everyone’s faces it was totally lame.

It’s a day late for Wordless Wednesday, so I feel like posting a picture without any caption so I guess that makes this Thoughtless Thursday?  Anyway.  Here. 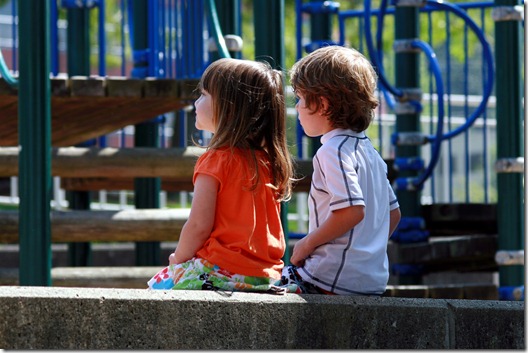