So the walls got painted. I picked a color called “Whipped Mint” that is a very soft, subtle, whisper of teal.  Very elegant, very luxe, very grown-up.  And then… 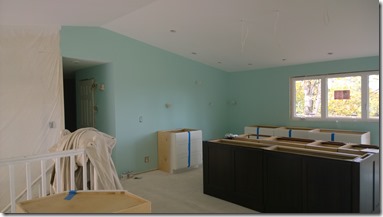 The camera really doesn’t show the shocking intensity of standing in a house covered in Whipped Mint.  It looks more like this IRL:

Yes, we have transformed our great room into a giant baby boy’s nursery.

I stood there kind of laughing and kind of crying at the same time and called Kevin.

Kevin: Rach?
Rachel: Kevin, the house got painted. It looks like a Taco del Mar in here!

Once he figured out I was not making a comment about the ethnicity of our painters but was, in fact, making fun of the paint color he tried to calm me down.  It’s okay…we can repaint…it’s not like choosing a husband, you can change it…no, we shouldn’t call off the remodel…

I keep going to the house to check it out and come up with new ways to describe the paint.  I’ve come up with new names for it, like Overly Aggressive Mint or Screamin’ Teal, or Pepto Blue, or At Least It’s Not Pink.

But then I went to the house one too many times or something and now I’m starting to kind of like the color.  Our GC tells me to stick with it.  He thinks the color looks “hot” and once we get everything in we’re going to love it.

In the meantime, I have had way too many restless nights of dreams where I am choosing between shades of light teal and then at the end of the dreams I somehow end up drowning.

I feel if you dug right into the heart of first world problems you would end up at me, standing in my living room with a handful of paint chips and a tall glass of water that I am probably about to accidentally drown in.

But hey, at least it’s not pink!

It was pumpkin farm weekend, which means I dusted off the ol’ camera and got to say a bunch of times, “Stop baring your teeth and just smile naturally, damn it!”

I have to say, they’re getting pretty good.

Well, two out of three ain’t bad.  Besides, I can always count on Leo’s “good side” to give me a winning shot. 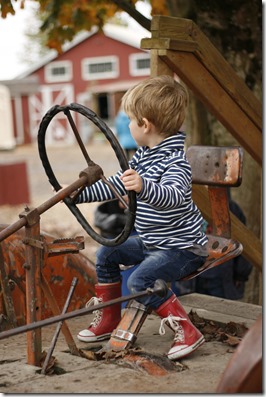 There was a new feature at the farm this year: using old-fashioned water pumps to get a rubber duckie down a pipe.  The boys couldn’t get enough. 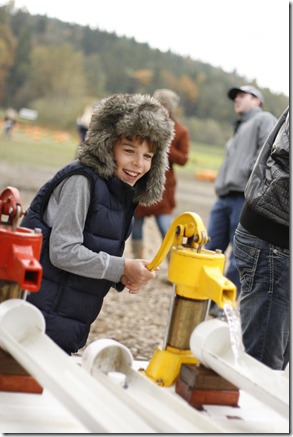 We got lost in the corn maze and every time we’d bump into another group we’d ask them, “We’ve gotten a bit lost…is it still Saturday?” (It was Sunday.) 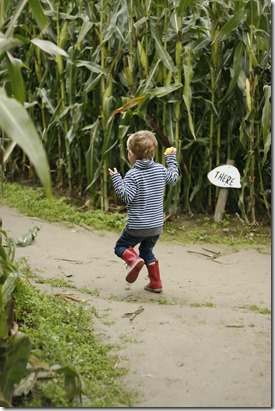 To pass some time I told the boys the story of Hansel and Gretel and apologized every few minutes for how much more inappropriate a story got as I told it, and I wasn’t even embellishing—just telling the story as it is.  It is an awful, horrid story of parents not loving their children, an old woman keeping one child as a slave and trying to eat the other one, and children ultimately burning an old lady to death.  Sleep tight, children!

I’ve got three boys and yet I still don’t have a full house?

It doesn’t matter; it’s clear I’m not playing with a full deck.  You want me to keep going?  I will!  I can be such a card!  You like these jokes?  Awww, you’re making me flush.  Okay, I’ll stop now.  I don’t have any ace left in the hole.

This is where I go when someone tells me to go to my happy place. 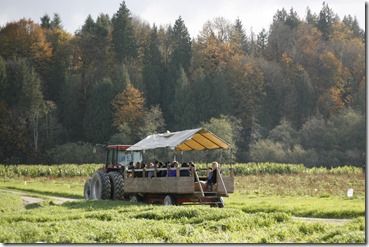 Of course, Halloween isn’t just about treats, it’s also about tricks, and this was the worst one of the day: 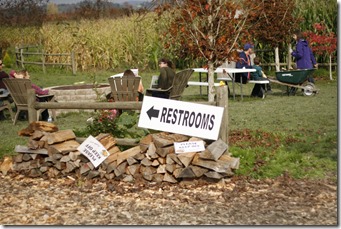 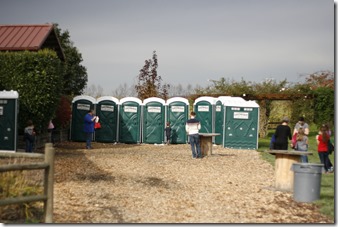 Totally NOT restrooms.  All five of us went into separate outhouses and as the boys each got out they yelled, “I’m first!”  “I’m second!” and so on.  From inside mine I yelled, “I’m not going for speed…I’m going for quantity!”  Then I told them to come back in 10 minutes and we’ll see who’s first then.

I only took about 25% of the photo ops I could have, so even though some of these shots are nice all I keep thinking about are the other shots we could have gotten if only we hadn’t wasted so much time going through the corn maze and pumping water and riding tractors and flinging apples at targets and choosing our stinkin’ pumpkins.

But you know, life’s all about choices, ain’t it? 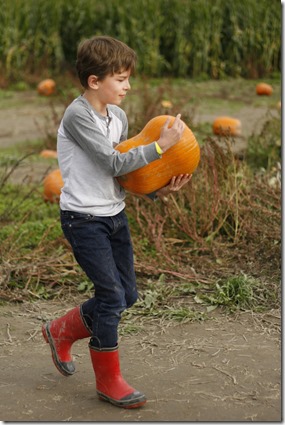 And in the end, I know we all made a good one.

Nope, not my birthday.  But one totally anonymous reader named ANDREA, who is probably famous and rich and clearly has amazing taste in blogs, asked for a remodel update.

The theme of this week is: Come to our place.  We have walls! 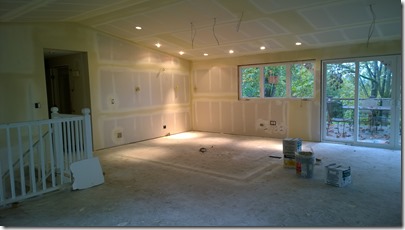 Two weeks ago, we went from bare stud walls to insulation and drywall in three days.  When people asked me how the remodel was going I said, “Great!  We’re cruising!  I heart remodels!”

The following week the walls got mudded on Monday and then the rest of the week was spent waiting for them to dry.  When people asked me how the remodel was going I said, “Terrible.  We’re never going to be finished.  Don’t ever remodel ANYTHING.”

This week’s plan is ambitious: painting the interior today, installing cabinets beginning tomorrow, installing front patio, starting on siding and shingling.  So this week is all yippeeeeeee!

This past week I bought this couch (but in charcoal)

Fell in love with these dining chairs:

And took lots of pictures of other people’s houses for inspiration while trying to make it look like I was just taking selfies of myself on the street outside their houses. 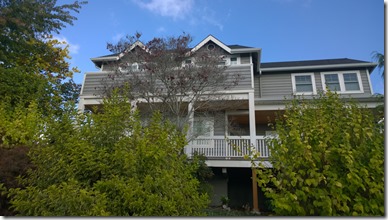 So I’m hot then I’m cold, I’m yes then I’m no, I’m in then I’m out, I’m up then I’m down,  and I’m pretty sure the police car circling the neighborhood I just walked through was probably called to the area on my behalf.  Also, I have started quoting Katy Perry songs on my blog.

I mean, I always knew I was a bit crazy but this remodel has turned me into a true psychopath.

Okay, I thought it was going to be hard for Rocco to top his introduction of Kevin to his class, but yesterday he got to introduce me when I volunteered for the first time.  He at least matched the introduction he gave his dad when he stood up and told his classmates,

“This is my mom.  She is kind, loving, and patient.  She listens very well to everything you say.”

I am totally happy with that introduction.  It’s not funny, it’s not intimidating, but it did make me get all choked up, so it must have been good.

In other kindergarten news, Rocco brought home this page he made for a class book today: 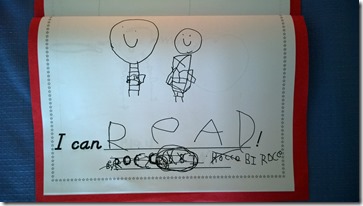 Too bad his sense of irony isn’t fully developed yet.  This page would be so much better if it read I can SPELL, or maybe I can DRAW HAIR ON STICK FIGURES.

Still, the paper is a very good Charlie Brown moment in Rocco’s life, and it’s definitely a keeper.

Kevin volunteered in Rocco’s kindergarten classroom today.  He actually had to return home from work to change his clothes before going when he realized that what he was wearing might not be appropriate:

Of course, the kindergarteners can’t read yet and even if they could they would probably think this shirt has something to do with chocolate milk, but just to be safe Kevin changed.

When he got to the classroom Mrs. J asked Rocco to introduce the guest.  Rocco stood up and said,

“This is Kevin.  He could probably beat up everyone in this room.  All at the same time.”

Then he sat down.

I’m going in to volunteer in Rocco’s classroom for my first time on Wednesday, and I better get a rock star introduction like that.