Today is Vincenzo’s actual birthday so I let him choose anything he wanted for dinner.  He requested, “Salmon and that pasta that tastes like dog food.”  Do you think I could make things easy and just get this?

Anyway, back to the Mad Scientist birthday party.  Here are pictures of the supplies we ordered from Oriental Trading that were delivered the day after the party: 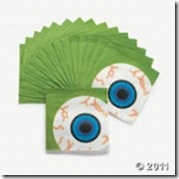 The bottom picture is a vinyl backdrop, 240 square feet big, that would have made the basement extremely awesome.  I personally think it loses something in a flat two-inch square form on this blog.  No?  I justified buying it for the party as a Halloween decoration we’ll use over and over again, so we’ll keep it anyway.  I’m not saying there’s not an angry, tear-soaked letter in my future though.

And finally, a picture of Vincenzo just before extinguishing the candles with his forehead. 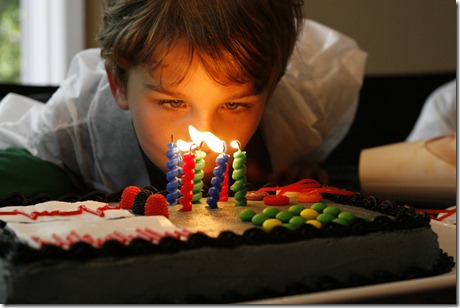 Or maybe he just set fire to them simply by staring at them?  Either way, he’s pretty hard core.

Still on the Mad Scientist birthday party.  Whenever you take pictures of subjects that are 3 to 4 feet tall, you should always be sure to hand out a batch of crotch awards.  Crotchies, as Kevin likes to call them.  So we’d like to extend a big congratulations to…

Most appropriate prop with crotch:

Best…you know what, I don’t want to go there on this one.  Feel free to have a go at it yourselves though.

I don’t have trophies for these honored crotches but if I did they would certain incorporate both a camel and a toe.

I never know how many details you want from my kids’ birthday parties so today I will give you absolutely all of them.  And then I’ll give you more tomorrow, and the day after that as well.  Today’s theme: If You are Crazy Like Me and want to Plan this Party then Read this Post.

I made the invitations in Photoshop and added a picture of screaming Vincenzo, then finished them off with a gobs of glitter glue:

When guests came, they had to scan in:

Then they went to the bathroom to receive lab coats and name badges and to give themselves a crazy hairdo.  The lab coats were $1.60 each from Mr. Disposable, which was awesome…but s/h was $16, which was not so awesome.  I got the name badges from Oriental Trading. 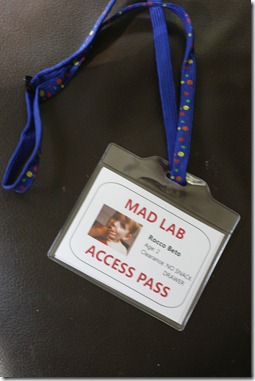 Once everyone had arrived we headed inside for an experiment to blow up balloons (I had prefilled balloons with 2tsp baking soda; we added some vinegar to the bottles then attached balloons and dumped contents.)

I talked a bit about static electricity, then took the kids to the basement where we had scattered a bunch of tissue paper squares; the kids had to rub the balloons on their heads and use them to pick up the paper and put it into bowls.  It was freakin’ hilarious.  Pro tip: the balloons from the experiment didn’t work very well, but fortunately we had blown up a bunch the old-fashioned way and they worked fine. 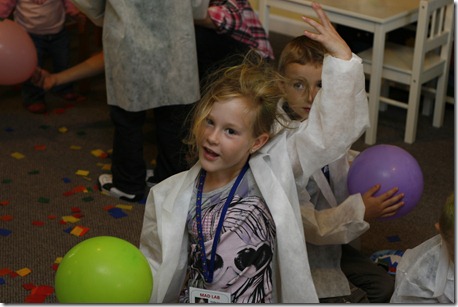 While they were busy picking up tissue paper, I went upstairs poured some milk onto each child’s plate and added some food dye.

Then I called them all upstairs, talked for about 10 seconds about surface tension, and showed them what happens when we break surface tension (by adding a couple drops of dish soap).  Super easy/fun experiment to try with your kids even if you don’t throw a party!

Next, the kids gathered around a table where I had a tray of 12 objects, some of which were magnetic and some of which weren’t.  They each got a sheet of paper with pictures of the objects on it and they wrote “yes” or “no” by each picture based on whether they thought it was magnetic.  When everyone was ready, Vincenzo held each object up to a magnet to show.

For the next experiment we filled a bottle with hot water and died it black, then put a bottle of cold water on top of it (we had the kids make predictions about what would happen first).  The hot water moved up, which wasn’t quite as cool as the favorite prediction that it was going to explode, but it was still pretty cool. 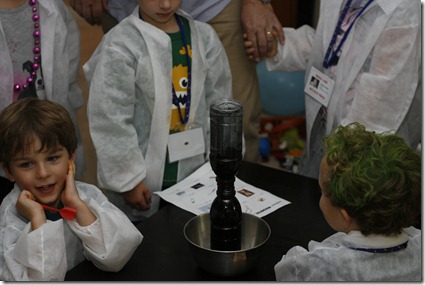 Still with me?  No matter; I’ll keep going.  We took an experiment break for lunch, which included:

I totally cheated for this party and purchased the food labels and a few other things from Celebration Shoppe.  Well worth the $8.

Then I sent the kids downstairs for a Monster Mash Dance Party, where the fog machine, bubble machine, and a disco light (don’t ask) all came in handy.

We cleared the table and set out the cakes while the kids all drank beer and made out downstairs.  (Just seeing if you’re still paying attention.)  Ready for my favorite part of the party? 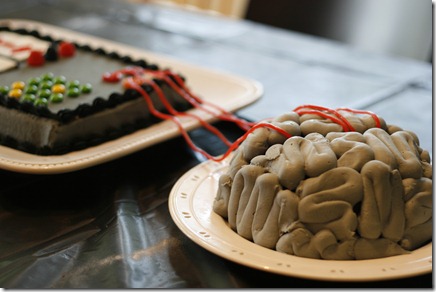 And of course, we couldn’t have a science birthday without the ol’ exploding volcano.  A couple weeks previous, we made 4 batches of play dough and stuck it on a Perrier bottle, along with a few dinosaurs we picked up at the dollar store.  We had to cover the whole thing with Polyurethane so the salt wouldn’t leech out.

Not the cheapest party in the world to throw, but it didn’t cost as as much as our wedding did.

I think.  The final bills aren’t in yet.

Status: feeling a bit better…but not better like most people feel better in their pregnancies.  I wake up nauseous; I hate food all day; everything smells and every smell is a stink; spend all evening trying my hardest to hold dinner in; the heartburn has cranked it up to high.  But my attitude is better now and I list these symptoms matter-of-factly instead of whiningly.  And that makes a huge difference.  (Not a big enough difference to ask my husband to move off the couch and back into bed, but a big enough difference that I don’t make a yucky face at him when I can tell he had fried food for lunch that day.)

Anyway, wanna see the baby bump?  We celebrated Vincenzo’s 6th yesterday (Mad Scientist style) so I ended up in a few pictures. 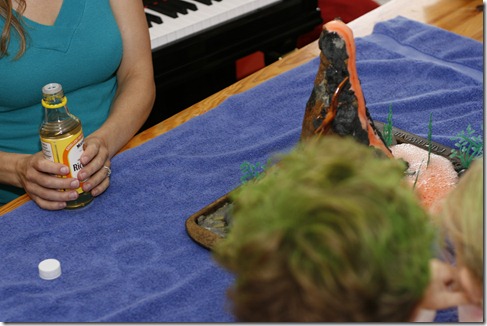 Well, maybe next time.  You’re thinking I’m pretty Hollywood for all my hidden bump pictures though, aren’t you?! 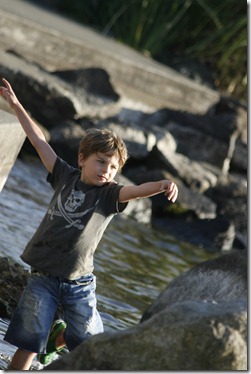 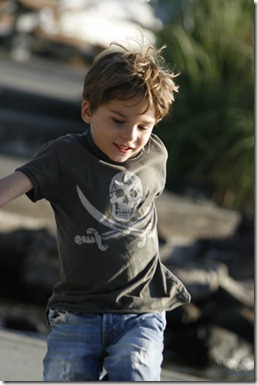 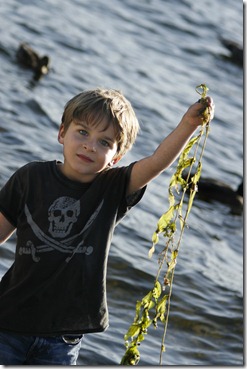 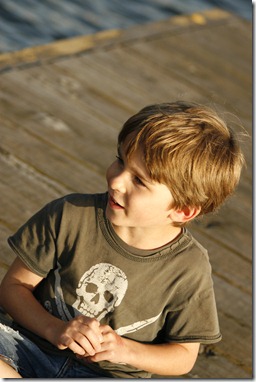 Well, maybe this one does.

(The two chins being a direct consequence of the previous three pictures.)

1. Rocco loves to turn around things I say to him.  For example I’ll say, “Rocco put on your shoes,” and he’ll say, “Mama put on shoes.” My favorite so far is when he told me, “Mama hab cute li’l bottom.”

2. My husband got ahold of my camera the other night.  I think Vincenzo is no longer eligible to run  for office after a series of shot like this:

3.  Rocco got a bumpy red rash mainly on his feet last week and this week the bottom of one foot is peeling.  I went on-line to find ourselves a diagnosis tonight and found a website that asked: “Do you have a rash that is red but not itchy and it affects the palms of your hands or soles of your feet?”  Yes, yes we do!  Tell us what it is, doc, and what we should do about it!

This may be syphillis.  See a doctor immediately.

So the ultrasound was on Thursday.  I did a good job not pre-worrying about it like I’ve done for everything in the past, but I couldn’t stop myself from being anxious the morning of the appointment.  It’s impossible not to relive some of the stuff we went through with Angelo when I’m going back to the same clinic and the same room where we found out our baby was not going to live three years ago.

All this resulted in my body going into convulsive shivers during the ultrasound (it does the same thing during labor) and even if the ultrasound had been done underwater in a hot tub cranked up to high, I still would have been shivering cold.  We could all hear my teeth clacking together with chattering as the sonographer checked out the baby’s size (perfect), stomach (perfect), spine (perfect), and heart (perfect).  It wasn’t until she finished counting five toes on each foot and five fingers on each hand that suddenly the shivering just stopped.  We laughed that the healthy heart didn’t calm me down—the digits did—but extra toes and fingers was one of the major signs on Angelo that something could be unfixably wrong.

In the meantime, I went on a major Etsy shopping spree this weekend for knit hats.  I’m ashamed at how predictably trendy I am, but I couldn’t resist: 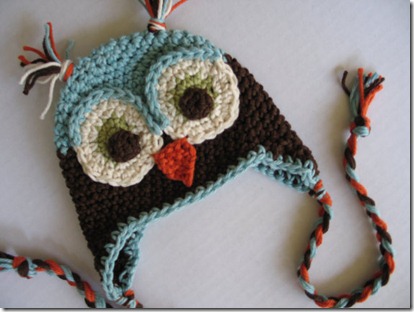 We couldn’t be more thrilled to add another boy to our family.

Now that school has started I have a whole 3-1/2 hours with just Rocco, and let me tell you—going from 2 kids to 1 kid feels like going from 10 kids to 0 kids.  Still, now that I have all this time to myself, I suddenly have no time at all!  I don’t know where it’s all going but I am absolutely pooped by the time V gets home from school.

Anyway, on the second day of school I decided to clean out V’s bed.  Here’s how it looked when I started:

Not too bad, right?  Until you start lifting up pillows and bean bags and find…

Legos, light-up toys, a Waldo book, a piece of baseboard, and a scrap of contact paper (in the middle) that he grew very attached to.  Not joking—it caused tears when he lost it one day.  I can’t imagine what it would do to him to know where I put it when I cleaned his bed that day. 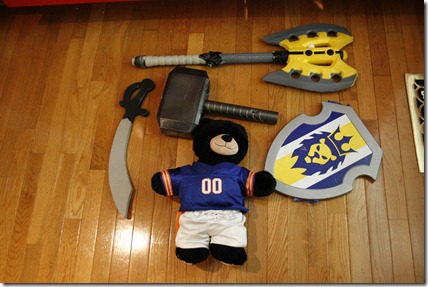 Weapons, football bear, and a shield.  The weapons are actually very important.  One night I got out of bed to find Vincenzo wide awake, tip-toeing toward the living room, Thor’s hammer in hand.  He said he had heard a noise and it was clear that the intruder was going to suffer a lightning bolt to the groin or something like that.

An old shirt, creepy baby, and books ranging from the X-Factor to the bible.  He doesn’t want to get pigeon holed into one genre just yet. 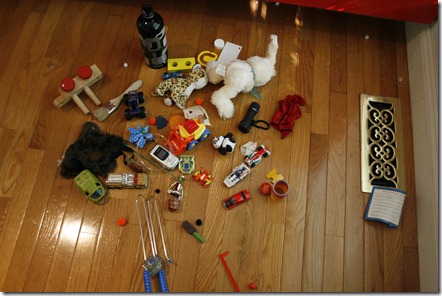 Junk including: more McDonald’s toys, Iron Man glove, my water bottle, old cell phone, and a bracelet he found in a parking garage and wore for a week straight.  (It went in the garbage pile and was later discovered in the garbage can by Vincenzo and worn for another two days.)

I cleaned this all out from the back of his fire truck bed—I didn’t even touch the cab or the roof.  I’m not sure if all this junk proves my son is a slob or his mother is lazy, but I’m sure we’re not going to win any Good Housekeeping awards either way.

Maybe this week I’ll tackle the top of his dresser.

Yup…still pregnant and still complaining about it.  But you don’t want to hear me whine, do you?  Look at these awesome knit hats for babies that my SIL found on-line.  (Here are two hats being modeled by twins.)

And culturally sensitive, too!

If you know anyone who these would be perfect for, which I’m pretty sure is anybody you know who is pregnant or has a newborn, you can click on this link.