Okay, I planned on showing you pictures of the house. We had the house keepers over and everything was all put away and shiny, and I even took a bunch of pictures to post. But then…I sent my phone through the washing machine and all the pictures are gone, and now our house is in its usual state of chaos with everything from the mess of gingerbread houses to a giant guinea pig compound in the middle of the living room, leaking hay and bedding all over the floors. (We’re babysitting the guinea pigs while their owners get married in Thailand.) 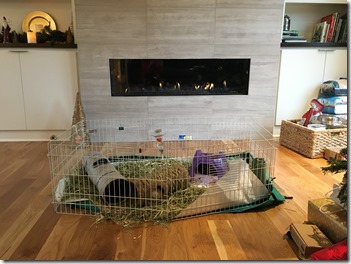 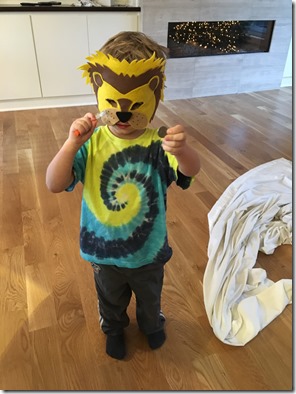 He’s also really into monsters. He drew some for you to see but was a bit disappointed with them because, he told me, “They look more like dinosaurs.”

I must not have had my glasses on because they looked more like scribbles to me, but I know better than to say as much to Leo.  He has unusually sharp teeth.

Leo is in the “why” stage, but it’s very different from Rocco’s, where the why’s came fast and furious and were never ending. Leo’s why’s come sporadically and take him by surprise. He’ll be playing with Hot Wheels then look up and say, “Why are there only rainbows when it rains?” and just as I finish with my explanation of the color spectrum and the refraction of light, he says, “Look, there is a car on my head!” And there is, indeed, a car on his head. Then a day will pass and he’ll be reading a Splat the Cat book then look up and say, “What is AM and PM?” and then while I explain the history of time and give him an introductory lesson to Latin roots, he yells, “P is for Penelope!” I think the why’s kind of hit him like vomit does, where it’s coming…it’s coming…you can’t ignore it…then BOOM it’s out and thank goodness for that!

My favorite “why” got yelled angrily from the backseat of the car one day. “Why is it taking so long for myself to grow up?!”

Maybe that’s why he’s so into walking on stilts lately—or, as Leo calls them, “skilts.”  He came down the hallway this morning like this and said, “Look, Mom! I’m so high!”

High on skilts, that boy is.

We stumbled upon the art project of Leo’s dreams when we decorated gingerbread houses a couple weeks ago. He got to use all of his favorite foods, and he decorated his every day for a week. Can you tell which one is Leo’s? 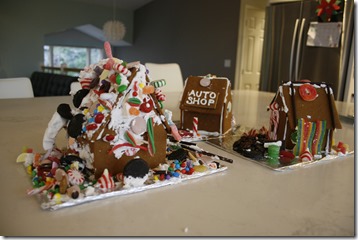 Seriously, I have to get Kevin’s help to lift that thing up! 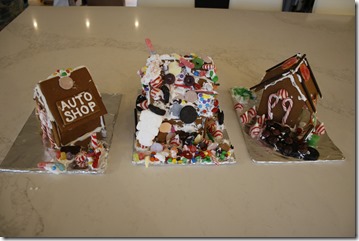 One of Leo’s favorite activities lately is to approach Vincenzo, who is usually found quietly reading on the couch, and hit him repeatedly with a sword. Vincenzo ignores for a little while, then gently play-fights back with Leo, who screams bloody murder then comes and tattles on Vincenzo to me. It’s a really fun game. Come over and play it sometime!

Leo takes his pants off a lot, saying, “My legs are warm.” Or, “I’m going to take my pants off just for the fun of it.” Then he’ll say his hands are cold so he’ll put on a pair of mittens because and then race down the hallway in underwear and gloves, asking me if I have a pair of gloves so I can race, too. Whenever I can find my gloves I join in.

At church this week the preacher guy was talking about how life is a story, so don’t get stuck in a sentence. Kevin turned to me and said, “The sentence Leo’s stuck in is, “Wheeeeeeee!”

And if you ask me, wheeeeeeee is not a bad place to be stuck. 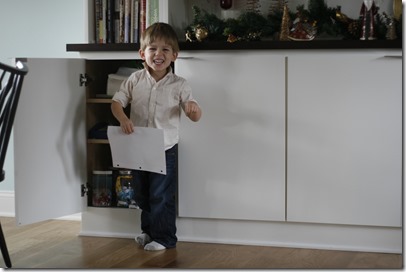