A couple weeks ago I bought a big tub of perler beads in preparation for Vincenzo’s Minecraft party. 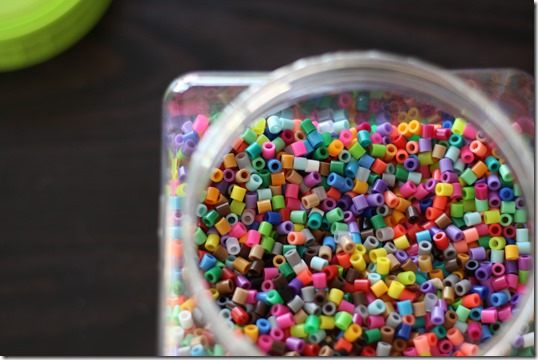 I had no idea what I was starting.  The kids have been even more obsessed with making Minecraft characters out of perler beads than they are with actually playing Minecraft, which I didn’t think was possible.  We come from a long line of obsessive people, so whatever you’re imagining: double it. 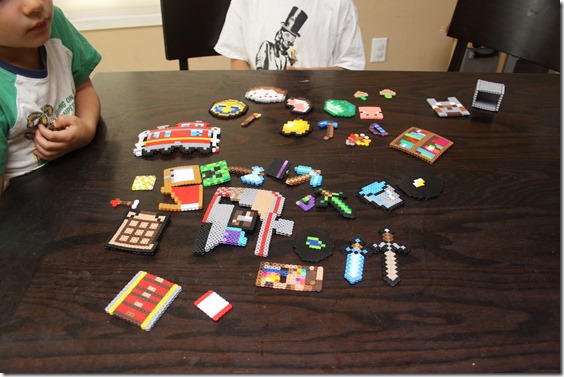 It’s not hard to do—Rocco just asks me to “Bring over the Internet,” so I set my computer on the table and we look up images of Minecraft perler beads and the boys get to work.

Even Leo gets into it.  Here is a finished work he calls “A zombie and a spider.”

In order to get the beads all melty, I have to iron them.  When I discovered this, I racked my brain for what the word “iron” meant and in some dusty corner of my brain the concept of ironing returned and I went to the depths of my closet and even found an iron that we actually owned!  So now the kids spend hours perler beading and I spend hours ironing.

The thing is, I realized I kind of like ironing.  It makes our clothes look so brand new, and the kids don’t bother me when I’m ironing because they have great respect for an activity that sometimes produces stuck-together perler beads.  And so, peace has reigned in our kingdom since the discovery of perler beads.

We did run into a little hiccup the other day, though.  Let’s identify some of the parts of this picture: 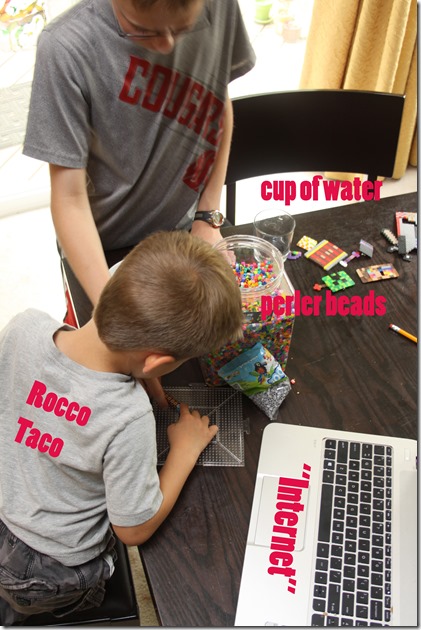 I looked over one afternoon to see Rocco blissfully perler beading next to an empty glass laying sideways on the table, the table itself looking like a shallow lake and my computer sitting there nonchalantly in the shallow lake, all la-ti-da.  Only things weren’t all la-ti-da.  Things were broken.  Very broken.

Rocco had broken the Internet.

The good news is that Kevin is some kind of soothsayer who predicted this very event two years ago when he purchased the computer, and he had bought an extended warranty.  He took the computer back to the Microsoft store where they let him pick out a brand new computer!

(If this computer were a car, it would totally be a low-rider with a thumping base, am I right?)

Peace has once more been restored to our kingdom.

In conclusion, I highly recommend perler beading for any of you with kids.  The kids will be happy making creations, your clothes will look sharper than ever, and if you play your cards right, you will end up with a brand new computer to boot.

For once, my kids are the reason we can have nice things!