As promised, here is the post about plane travel with Rocco.  If any of you have ever spent four-plus hours on a plane with a three foot tall, belligerent drunk, then you can skip this post because you know exactly how it goes.

They let us on the plane anyway.

So that was fun.

I decided to let Rocco have his first piece of gum this trip, to help with take-off and landing.  I took a piece from the pack and set it on my lap while I explained how gum works (i.e. chew, don’t swallow).  Then I returned to listening attentively to the safety video.  After a couple minutes, Rocco took the gum off my lap.  “I just want to hold it,” he explained.  Okay, I told him, but we’re waiting until the plane starts moving to chew it.

I looked over a minute later and he had cracked the wrapper open.  “I just want to peek at it,” he explained.  Okay, I told him again, but we’re waiting until the plane starts moving to chew it.

One minute later and he had removed the wrapper.  “I just want to see it better,”  he explained.  Okay, I told him, but we’re waiting until the plane moves to chew it.

A minute later I looked over at him and the piece of gum was clearly in his mouth, with one little white corner sticking out.  “ROOO–CCO!” I said.  He looked up at me innocently and asked, “Ih duh pane moobing, Mom?”

Another minute later and I looked over to see him eating Bugles.  I told him he needed to spit out his gum in order to eat, but he explained proudly that he already ate his gum.

And then the plane started moving.

If those plane windows opened, I swears I would have jumped out and just walked home at that point.

But they didn’t, so I was the one sitting next to Rocco an hour later when he began using his seatbelt as a storage device for Gummy Bears.  We got them all put away, except a green one we couldn’t find.  To curb the trauma over the lost green Gummy Bear we gave him some Sixlets, which he dumped into his shirt and rolled up, singing, “Special deliiiiivery!”  Then he unrolled his shirt and all the Sixlets went a-rolling too.  We recovered most of those and decided to put his candy away for awhile.  He remained undaunted because he still had a hand to insert into his mouth–the same hand that was in his mouth for 90% of the weekend. 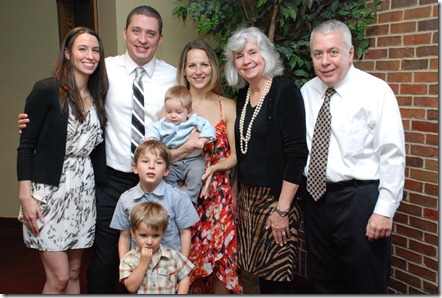 His hand now smells like my headgear smelled in junior high (the one I was too lazy to ever rinse clean).

But somehow we made it to our destination and as they say, all’s well that ends well.  Especially when it rear ends well. 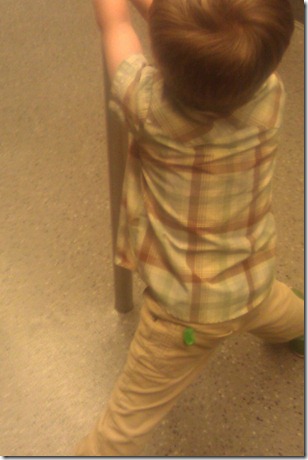 Still not as gross as Rocco’s hand.