Kevin’s parental leave just came to an end.  I’m sad to see him go but am glad to not have to feel like a douchebag each time I say “parental leave” instead of “paternity leave,” which is apparently the HR equivalent of using the word “retarded” these days.

Anyway.  We’re closing it out interview-style.

MrsMouthy: So, Kevin, what was your “high” during the last four weeks?

Kevin: Aside from this interview?  Reading your blog posts.  And wooting.

Kevin:  Waking up jet lagged, walking out of our bedroom, tripping over an upside down bowl (that I regularly eat out of, BTW) placed in the middle of the carpet, and being told that it was covering up a pile that the cat made and you aren’t sure which end it came from but it might be diarrhea.  Starting to clean it and realizing it was actually a melted ice cream bar that was somehow left on the carpet.  Then having to pin down the cat to cut the chocolate out of his fur as he appeared to have rolled over it at some point during the night.  Clyde did end up puking 3 times that day for I think unrelated reasons.  Rocco had an up-the-back poop.  Vincenzo dropped an entire Slurpee on the carpet.  You continued to deny that don’t know how that “Skinny Cow Fudge Delight” bar got there.

MrsMouthy: I told you the CAT did it.  He loves Skinny Cow Fudge Delight bars.  Anyway, if your parental leave had a theme song, what would it be?

Kevin: Free Bird, natch.  Or maybe Keep Your Hands to Yourself by the Georgia Satellites.  I must be mistaken, but I thought I did get you a wedding ring at some point; when do I get my huggy and kissy?

MrsMouthy: XOXO.  There.  What would be your parental leave’s state flag?

Kevin: Stars and bars baby.  The south will rise again!

MrsMouthy: [Distancing herself on couch]  What is your crowning achievement of parental leave?

Kevin: Reading 43 Magic Tree House books.  There are 43 in the series; unfortunately I only read the “Night of the Ninjas” book 43 times so I really can’t tell you what happens outside of that book.  On the bright side, I do almost have that book memorized.  (Spoiler alert, one of the ninjas is a girl!)

MrsMouthy:  Another spoiler alert: the words “Jack” and “Annie” appear on each page no less than twenty times.  Remember the day we made you drink a sip of water every time I came to one of their names?

Kevin:  Oh yeah.  My glass was empty after one page.  We need to burn those books before Vincenzo reaches drinking age.

MrsMouthy:  Now that you’ve experienced home life for four straight weeks, do you think you might be able to stop referring to your wife’s job as a “permanent staycation?”

Kevin: You’re right, “Staycation” isn’t the right word.  You leave the house to go shopping several times a day so you really aren’t staying.  Has the term “Spendcation” been coined yet?

Kevin: It was fun, we should do it again!  Send the kids over to Grammy’s and show up at my job every day for 4 weeks!  I could have you install hardwoods in my office and redo the baseboards there.

Stairs he built to the playhouse: 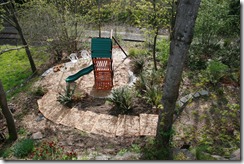 Pavers he installed (with help from my family) under the deck: 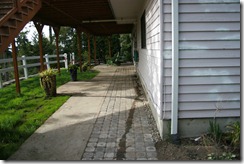 The sun he helped set in my sky every night.  Awwwwwww. 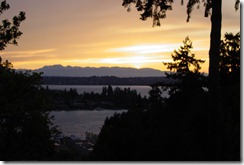