Nothing big is going on around here lately so I thought I’d post a bunch of little things.  They won’t make you put on your LOLrsk8s, but you might want to lace up your AWWWW-lrsk8s.

Conversation 1:
Vincenzo: Someday when I’m bigger and I don’t have teeny tiny arms I’ll sit in the car without a car seat and then I can reach my sword on the floor.
Me: Do you think you’ll still be into swords by the time your arms are that big?  Maybe you’ll be into something different by then, like girls.
V: I think I’ll still be a turtle.

Conversation 3:
Me: Guess what I did before you woke up today?  I went swimming!
V: I know.
Me: How could you possibly have known that?
V: I dreamt it.

Covnersation 4:
Me: Will you put your face under the water at swim lessons today?
V: No, but I’ll put my nose and one eye under.

Have a fab weekend, everyone! 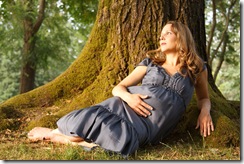 Those are about the only pictures of my on record where my mouth isn’t wide open, so I here’s one that proves it really is me. 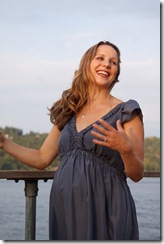 Okay, okay, yesterday’s post was full of partial truths.  Yes, Jnott did elope and go to Hawaii, but no those weren’t their actual wedding pictures.  Here is an actual picture of their wedding day.

What yesterday’s pictures were really from was a a zombie walk we did on Friday night to try to take back the Guinness Book of World Record title.  The evening was rife with fake blood, bad jokes, and, of course, BRAINS.

Driving there, we stopped at an intersection and looked over to see another zombie driving to the march.  We both rolled our windows down and he asked, “Pardon me, do you have any Brain Poupon?”  Like I said, rife with bad jokes.  Once we parked, our friend Erica retouched everyone’s hair/faces with flour, as she was the official Flour Girl of our party.  Most of the zombie walk involved standing in line trying to register.  The line-standing was occasionally punctuated with the chant, “WHAT DO WE WANT?” to which everyone yelled, “BRAINS!”  This was followed by, “WHEN DO WE WANT THEM?” to which everyone yelled, “BRAINS!”  Zombies.

The march took place in a part of Seattle called Fremont that has a very colorful community–so colorful that at times it was hard to tell the undead from the not dead.  Here are pictures of both, for your viewing pleasure. 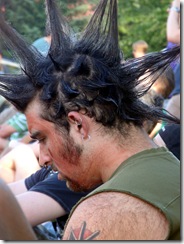 Not dead (but quite possibly bored on the job). 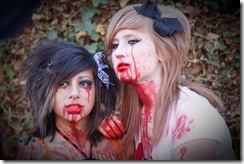 I’m not sure if we broke any zombie records but even if we didn’t, at least I’ve had something to blog about this week.  Tomorrow it will be back to writing about pantsless mannequins and small fundus size, so I hope you’ve made the most of this mini brain-cation.

That was in April.  This weekend we finally got to see some pictures of their magical day, and I will now invade their privacy by posting them for the world to see.

Signing the marriage certificate…or is that the prenup?

The receiving line (short, due to the elope-iness of the event).

So let’s everyone send them a big congratulations, and maybe some Waterford crystal and self-tanner to go with it!  Congrats, Jnet and Mott!  From here on out you will be known as Jnott in this blog.

*Her husband is older by almost two years.  Kevin and I set them up a couple years ago, if that gives you any indication of what kind a guy he is.  🙂

I think it’s mean to make pregnant ladies pee in a cup.  If you have never simultaneously been eight months pregnant and peed in a cup, try holding a watermelon to your stomach with one hand while reaching the other down with a Dixie cup and see if you can do it without any stray drops.  Not that you can see the drops at that point, but trust me, you’ll know if you made it or not.

And the good news is…no news!  Mbungo looks totally healthy and is growing, so I can stop worrying about the placenta being detached, a clot in the cord, the danger of Mbungo swallowing his own poop, and a bunch of other things that my small fundus could have been indicators of.

Of course, we didn’t make it out of the appointment without the sonographer commenting, “Well, his head certainly isn’t measuring small!”  I get it, okay?  The watermelon isn’t just a metaphor in my case!

A couple weeks ago after a normal OB appointment and a normal ultrasound, I got a call from the doctor’s office that went something like this:

Calm voice on phone: I’m calling from the doctor’s office to set up weekly Neonatal Stress Tests.
Panicky voice on phone (i.e. me): Neonatal Stress Tests?  Is something wrong?  What’s wrong with my baby?!!  The doctor saw something on the ultrasound, didn’t she?  It’s the cord—it was too close to the baby’s face.  I knew this was going to happen.  Is he going to be okay?  Is my baby going to make it?  Mah bay-baaaaaay!
Calm voice: I’m sorry ma’am; I’m just the receptionist.

Later I learned there was absolutely nothing wrong with Mbungo; my OB was just taking extra precautions because of Angelo and because I have a slight blood clotting condition.  But still!  How could I not be a little stressed out?  I mean, the word “stress” is right there in the name of the tests they signed me up for!

Anyway, for the past two appointments my stomach has been measuring a bit small.  If this had been my first pregnancy, the one where I didn’t worry about anything and where I was proud of my small size, I would have skipped out of the office and called everyone I knew who had been a boat when they were pregnant to tell them how small I was.  As it is, this is my third pregnancy and the one where I call the OB’s office if I don’t feel the baby moving for five minutes, so there has been no skipping or phone calling.

I have an ultrasound in the morning to make sure Mbungo is growing okay and I told myself I wouldn’t bing* “small fundus,” but then I accidentally did.  I’m trying to go with the safest possibility, which is that the baby is simply sideways and will probably turn his head south in the next week or two and everything will proceed as normal.  It’s just that there are much worse possibilities that a small fundus could indicate, and yes, Mom, I know I’m being a bit dramatic but the last time a doctor said that she was sending me back for an ultrasound but not to worry; everything looks mostly normal and this is probably one of those things that will just work itself out—that was the time I found out my baby was going to die.

I’ll write an update as soon as I can.  Probably nothing is wrong.  But I hate probability.